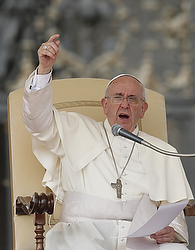 Six months ago today the Holy Spirit swooped down and showed us all what "doing your job" really looks like. Since that time, Pope Francis has taken the world by storm with gestures as big as a peace vigil in St. Peter's Square and as small as a compact car. He's preached to millions gathered on Copacabana Beach and to Vatican employees at daily Mass in the Domus Sanctae Marthae, the Vatican guesthouse where he lives.

The daily forum of the Domus Mass, recently restarted after a summer hiatus, has carried some especially vivid soundbites from Pope Francis. This morning he tackled gossip, calling it cowardice and saying it "kills the image of God" in other people.

This isn't the first time Pope Francis took on the damaging power of words. On June 13, he memorably noted, in reference to slander, that "the tongue can also kill." On April 15, he said calumny is more than mere sin and is, in fact, the work of Satan. And on March 27, a mere two weeks after his election, Pope Francis cautioned Christians against engaging in the "dark joy" of gossip.

It's probably safe to say that no one imagined the Eighth Commandment would get such a workout under the new pope. But here's Pope Francis, consistently sounding off throughout his short pontificate, warning of the dangers of a hierarchy of speech-driven sins:

Even the least of these, according to the pope, is at odds with the "Culture of Encounter" he seeks to promote, in which every person sees every other person they encounter as a human being, loved by God. If gossip "kills the image of God" in others, then we really are less inclined to encounter them as real human beings.

Stepping back against the backdrop of U.S. culture with voices on TV, radio, print and the Internet spouting endless accounts of the failures of other people, the vision and standard Pope Francis holds for society suddenly becomes jarring and daunting. Even more so the value that he suggests people use in place of trash talk: mercy.

With the election of Cardinal Bergoglio, someone predicted by almost none of the pundits and experts, the thought occurred: "Well, kudos to the Holy Spirit for pulling off the relatively mild trick of outsmarting cable news." With his call for an end to gossip, badmouthing and endless attacks on other people, it would seem the election of Pope Francis calls the cable news worldview into serious question in other ways too.