'A Rare Voice of Optimism': an Easter Resolution in the Cremisan Valley

As the Easter season draws near its conclusion at Pentecost, it's worth noting an Easter story that brought a ray of hope to a community that is often in dire need of it. The Supreme Court of Israel handed down a ruling just before Easter that spurred rejoicing from the Christian community of the Holy Land. The decision was not to build a portion of the separation barrier through the Cremisan Valley in the West Bank, near Bethlehem.

The U.S. bishops, through their Committee on International Justice and Peace, had for years opposed construction in the Cremisan Valley because it would have separated Christian communities there from their agricultural lands.

"This threatens the livelihoods of the remaining Christian community of Bethlehem, pressuring even more to leave the Holy Land," wrote Bishop Oscar Cantu of Las Cruces, New Mexico, in a letter to members of Congress in February. "The barrier would also negatively impact the work of the Catholic Church in the Valley by separating a Salesian monastery from a nearby convent, isolating both their ministries from critical resources and contacts with the local population.  In one case, the proposed route would surround a Salesian school for 450 students on three sides with a militarized barrier."

In the face of this challenge, the response of the Christian community is captured in an April 20 letter to Bishop Cantu from the Latin Patriarch of Jerusalem, Fouad Twal, who called the ruling a victory for the local Church and "truly an Easter miracle and a blissful sign of the Resurrection." He added, "This is also a victory for Israeli justice, for the courageous decision." Bishop Cantu said the letter from Patriarch Twal brought "a rare voice of optimism from the Middle East." 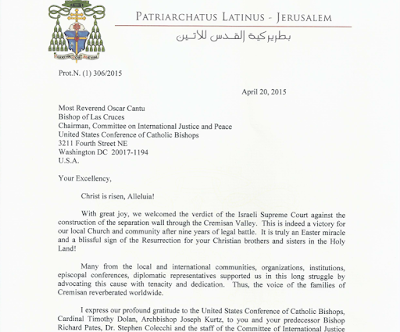 For background, the Latin Patriarch of Jerusalem is the Roman Catholic bishop whose diocese is comprised of the entire Holy land.

The Christian communities in his care are ancient ones who connect Christians globally to the roots of their faith. These are people who celebrate Palm Sunday where it actually happened... 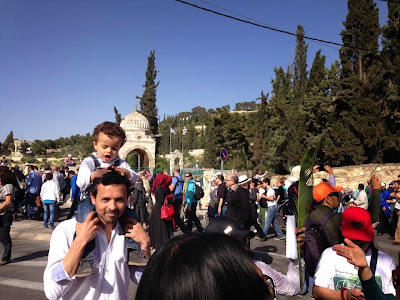 And who make their Easter vigil at the site of the empty tomb... 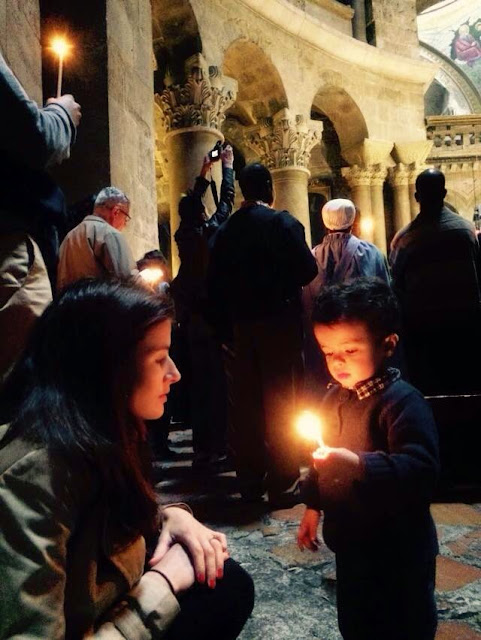 This sense of solidarity only amplifies the humanitarian concerns the U.S. bishops have for persecuted Christians throughout the Middle East. This is reflected in efforts like USCCB's annual participation in the Co-ordination of Episcopal Conferences in Support of the Church of the Holy land and the March 10 statement of the U.S. bishops' Administrative Committee on the persecution of Christians in the Middle East and elsewhere.

In the March 10 statement, issued during Lent, the bishops compared the plight of Middle East Christians to the suffering of Jesus Christ. Which makes it all the more fitting that Patriarch Twal's response to the Cremisan Valley situation was one of Easter joy.

(Photos from Palm Sunday and Easter vigil courtesy of the Latin Patriarchate of Jerusalem.)