Today marks the 50th anniversary of the promulgation of Nostra Aetate, which is the Catholic Church’s Magna Carta for interreligious dialogue. Catholics, especially those who were raised before the Second Vatican Council, will note how this particular document announced in unambiguous language the Church’s absolute rejection of the charge of deicide against the Jewish people while also, and significantly, asserting that Jews are not “cut off” from God and “accursed” forever – a point thus signifying that the Covenant between God and Israel was not revoked (also referred to as “supercessionism”). Catholics will also note that the document just as importantly ventured to dramatically overturn the narrative that for centuries cast a long shadow of suspicion and condemnation over all non-Christian religions when it declared: “The Catholic Church rejects nothing of what is true and holy in these religions.” (NA 2) In his general audience this morning, Pope Francis echoed the commitment of each pope since the Council to the tenets of Nostra Aetate, when he declared that the Church, “while remaining faithful to the truth of the gospel, namely, that the offer of salvation has its origin in Jesus alone, nevertheless is and will remain forevermore open to dialogue with all religions.” In fact, without the promulgation of Nostra Aetate, events such as the still-fresh-in-our mind and powerfully emotive multi-religious prayer event that was convened by Pope Francis at the Ground Zero Memorial in New York, would likely never have happened. 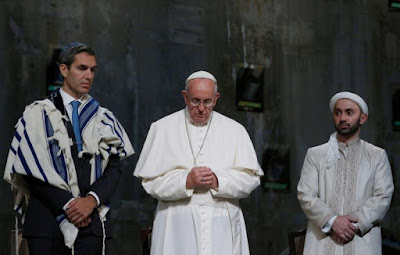 It would be helpful for all Catholics to reflect on this day of celebration that the most fruitful dimension of Nostra Aetate—one, by the way, that is also continuously referred to by Pope Francis—is the view that dialogue (especially the dialogue of action) can contribute so much, perhaps more than anything else, to insuring greater understanding, affection and esteem between peoples of differing beliefs. And, in doing so, it can contribute to establishing the kind of peace that secular leaders and institutions simply cannot achieve on their own. But even more practically, Nostra Aetate’s appeal to ever greater collaboration between the followers of the world’s religions finds with Pope Francis a simple blueprint for immediate, local, and personal implementation of the rudiments of dialogue: namely, that our collaboration can take the shape of working together in our own neighborhoods and communities to identify and address the needs of the most vulnerable; in doing so, we plant the kinds of seeds that foster an intimacy of mutual esteem and respect that, for Catholics, make real the vision of interreligious harmony called for in Nostra Aetate.

At the end of the day, one might opine, Nostra Aetate is a prophetic text in that it rightly forecasts the relationship between dialogue and healing – it is, in short, a prescription for healing. And each moment of each day, since the foundation of human history, human beings have, in varying degrees, been in need of healing from all kinds of brokenness. By exhorting us to move beyond the violence and brutality (and stupidity!) that so often characterized the past relations between religions, Nostra Aetate offers all of us simple, yet profound and inescapable, recipe for healing and hope when it urges “its sons and daughters” to embark with intention (i.e., with a disposition that listens to learn, forgives to sow seeds of peace, shows compassion and mercy to establish ties of love) on the path of dialogue. And so, we rejoice at the last 50 years in which so many within the Church have accompanied non-Christians on the path of reconciliation that is dialogue. They have planted incredible seeds of possibility for all of us; and now we are beckoned to take up this mission and help bring the seeds to sprout in the light of God’s powerful love and mercy and compassion which we bear as His sons and daughters. Thank you, Council Fathers, for Nostra Aetate—50 years old today!
Posted by Matt Palmer at 2:17 PM