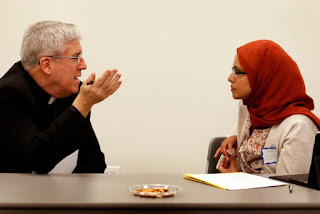 Sometimes I ask people how they became committed to dialogue. Occasionally the story is dramatic.

One priest told me that as a young graduate student he went to an ecumenical prayer service. When he walked out he knew he must commit himself to dialogue. Over thirty years later, he is still teaching about ecumenism and dialoguing with others.

Most people’s experience is more mundane. My friends often say that they were invited to an ecumenical or interreligious dialogue. They found that was where they belonged. They enjoyed learning about others and engaging the conversation. The conversation got deeper over time.

My own experience is that I was chosen for an ecumenical position. In the beginning I found myself ‘staying with people I knew’ at ecumenical and interreligious meetings. I eventually realized that I would have to take a little risk to get to know people. So I took to coming to meetings early for the luncheon before the meeting. I tried to sit next to someone I didn’t know, someone I could get to know better. Dialogue begins with establishing a personal relationship, with becoming friends. Thus I had some good but simple meals and got to know many of the participants.

Most people I have gotten to know through dialogues are quite impressive. They are knowledgeable and spiritually deep. I try to listen intently and to learn from them. Of course I often share things about myself as well. Dialogue is mutual.

To this day, I find that on the way home from a meeting I often am thinking about what was said and what I learned. Later in the day, I might bring something that affected me into prayer. I ask myself how God might be speaking to me through the other person.

I know that the work of the Holy Spirit is not limited to my Catholic colleagues. Sometimes the good example and sterling character of my dialogue partners urges me to be better or to understand more deeply.

--
Father John W. Crossin is an Oblate of St. Francis DeSales and executive director of the U.S. Bishops’ Secretariat for Ecumenical and Interreligious Affairs.