Countdown to World Youth Day: A Massive Display of Joy and Faith 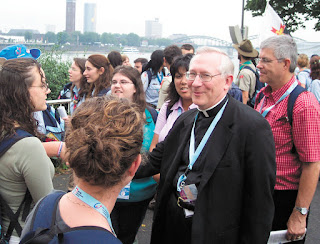 Participation at the World Youth Day in Toronto in 2002 was one of the most joyful and positive experiences I have ever had as a priest or bishop. It was soon after our national Bishops’ meeting in Dallas that June, at the height of the crisis over the sexual abuse of minors by clergy, that I went to Toronto as one of the Bishop-Catechists for my first World Youth Day, not really knowing what to expect.

I had witnessed many big public events, especially during my years of residence in Rome. However, at the end of the Papal Mass that Sunday in Toronto, when I walked with the other Bishops to the railing of the massive stage, I can’t fully describe what it was like to behold the full sweep of 800,000 people, mostly young, filled with joy at what they had celebrated. It was an incredibly moving experience based not on sheer numbers alone, but above all on the spirit of the occasion. I can only describe it as a massive display of religious joy and faith.

World Youth Day (which is really spread over a week) is above all a religious pilgrimage. The young Catholics who attend are highly motivated, and the major events are beautiful affirmations of faith. The music included both popular and traditional styles led by very talented people. If you watch the televised events you can see the intensity and prayerfulness on so many young faces, only distracted when they realized that the camera was on them. Truly, these events are great occasions for young people from every continent to celebrate their Catholic Faith with the Holy Father and to be reconfirmed in that faith.

Pope Saint John Paul the Great always had a special place in his heart for the young. It was his courageous, audacious idea in the 1980s to hold World Youth Days. Without him, neither Toronto nor any of the other World Youth Days that preceded or followed would have ever taken place. Today Pope Francis is also a charismatic figure to whom young people are drawn because they understand that he is a true spiritual father. As the great nineteenth century convert, Cardinal Newman--now Blessed John Henry Newman--once observed, evil may be seductive and glamorous, but people are drawn even more by purity and truth. Young people see that in a Pope, who embodies the teaching of Jesus Christ and the gospel.

My few days in Toronto--at a very difficult time for those of us who were Bishops--was truly a tonic for my soul, for which I give thanks to God and to Pope St. John Paul. World Youth Day 2002 confirmed my faith that whatever evils might befall the Church, Christ’s promise will prove true, that the gates of hell will not prevail against it.