Catholic Education Ad Campaign in the Empire State Strikes Back 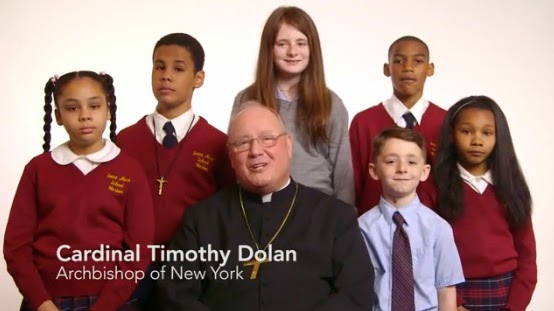 An ad campaign in the Empire State has Cardinal Timothy Dolan of New York and a handful of Catholic school kids, some wearing sweaters from St. Mark’s School in Harlem, addressing Governor Andrew Cuomo directly.

The issue? The governor’s apparent reneging on a promise to the state’s bishops to include in the state budget a tax credit to benefit all schools, Catholic and otherwise. Known as the Education Investment Tax Credit, the proposal lets people lower tax bills by donating to schools. Money to private schools could be used for scholarships for student who otherwise would find Catholic school education beyond their reach.

A tax credit would allow donors to subtract the total amount of the donation from what they owe the state in taxes, up to a certain amount. The state would not hand over money, but citizens who want to help schools would. New Yorkers would be free to decide whether to give to public or private school coffers or to no one at all. New York State already gives tax credits to breweries and film makers. Why not to kids?

Arguments in support of Catholic schools seem like no-brainers. The government requires parents to educate their children, but in doing so, it should not deny parents the freedom to choose what they deem the best school for their offspring. It even can be seen as a religious freedom issue for parents who seek holistic schooling, which includes moral, ethical and religious education.

Parents also have the right – even the duty – to do best by their child when it comes to education. Where schools are substandard, as many schools in urban areas are, parents have a right to enroll a child in an alternative school where the child feels and is safe. These are basic prerequisites for learning. With choice, parents can opt for a public school, parochial school, private school, or charter school. When it comes to something as vital as a child’s education, parents need the freedom to choose.

Even a top-flight school, public or otherwise, may not be right for some youngsters. To ask children to tough it out for several years can be cruel. Who wants to be miserable for six hours a day, five days a week, ten months annually for who knows how many years? When in a miserable work experience, adults have the option to seek other employment. Why should vulnerable children simply be stuck and expected to tough it out?

Governor Cuomo associates himself with choice in other areas; it’s puzzling that he won’t support freedom in education.