In a recent homily, Pope Francis reminded Catholics that there are two kinds of persecution. There is the persecution that the early Church famously faced in the Roman Empire, and which Christians in places like Nigeria, Egypt, and Pakistan continue to face today. But Pope Francis names another kind of persecution: “polite persecution.” This is the social marginalization of Christians who dissent from the direction in which secular society is moving. Polite persecution has been on full display in recent weeks here in the United States.

Several states have passed or considered legislation designed to protect people of faith after the redefinition of marriage in civil law. In a pluralistic society, where there are deep disagreements about the nature of sex and marriage, people with deeply held religious convictions should not be required by the government to do what they believe is wrong. State religious freedom legislation, such as Mississippi’s Protecting Freedom of Conscience from Government Discrimination Act, simply aims to protect people from being forced to violate their consciences.

Despite the clear need for laws protecting religious freedom in the wake of the Supreme Court’s redefinition of marriage, cultural and financial elites have used their power to threaten and even shut down some of these state bills, such as in Georgia. In the words of the Holy Father, these celebrities and business executives have engaged in a campaign of “polite persecution.” Pope Francis says that polite persecution goes by the name of “culture, modernity, progress.” And indeed, this kind of language is being used to shut out dissenting voices. A CEO, actor, or popular singer says that a person is “on the wrong side of history,” then the discussion is over.

These women and men could use their power to foster a legitimate debate about how our politics can function with a diversity of views. They could raise their voices in defense of what Pope Francis calls “a healthy pluralism,” one where people of faith are able to bring their understanding of the common good into public debate. However, what we increasingly see is bullying, public shaming, and the elimination of legal protections for people of faith. As the Pope says, polite persecution takes away “even conscientious objection.” In other words, if you don’t agree with what today’s film producers and tech industry leaders say about marriage, you cannot simply opt out. You have no place in “polite society.”

At every Mass, we Catholics remember the self-offering of a Christ who was rejected. As we take and eat the body and blood of Jesus, we are united with our persecuted Lord, and that is why Pope Francis can say that persecution is “the Church’s daily bread.” As we continue to work for the rights and freedom of our Church – and all people who may one day find themselves on “the wrong side” of the powerful in society– we do so with confidence, because “The Lord has promised that he will not be far from us.”

Aaron Matthew Weldon is Program Specialist for the USCCB Ad Hoc Committee for Religious Liberty. Learn more about the U.S. bishops' religious liberty efforts at www.usccb.org/freedom.
Follow the USCCB's religious freedom efforts on Twitter: @usccbfreedom
Posted by Matt Palmer at 10:26 AM No comments:

Strengthening the Church at Home 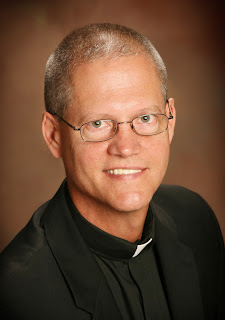 Many Americans are surprised to hear that almost half of our country is considered mission territory. In fact, “home mission territory” can be found from Alaska to Louisiana, from Ohio to California. The needs of our mission dioceses vary greatly and the support of the Catholic Home Missions Appeal is vital to providing adequate pastoral services to our church at home.

The Diocese of Cheyenne, which I lead as bishop, is one of over 80 dioceses and eparchies that receives support from the Catholic Home Missions Appeal. One of our biggest challenges is how expansive and rural the diocese is – it covers the entire state of Wyoming. Many of our priests are charged with caring for multiple parishes, sometimes up to 100 miles apart. I drive more than 30,000 miles each year within the diocese to make pastoral visits.

These challenges impact our parishioners as well as they try to participate in the sacraments and parish life. For example, we wanted to provide a retreat for teens to give them an encounter with Christ and also to encourage them to return as leaders in future years. However, we faced a shortage of staff to plan the event and the lack of a retreat center in Cheyenne. But with the help of a grant from Catholic Home Missions, we were able to organize a successful event and bring teens from ten parishes to Colorado for the retreat!

The challenges in Cheyenne and across the home missions are great and often seem insurmountable. But many people give so much time and energy to serve the Church that it strengthens and grows. I cannot thank you enough for your support of the Catholic Home Missions Appeal. It is through not only your contributions but your prayers as well that make ministries possible.

This year I am excited to begin my tenure as Chairman of the Subcommittee on Catholic Home Missions and lead our efforts to support our many struggling dioceses. I encourage you to learn more about the home missions. Visit our website: www.usccb.org/home-missions. There you will find videos, newsletters, our annual report, and an interactive map of where funding goes.

Also, Catholic News Service recently featured Home Mission dioceses in a video and article series. They will help you put faces and experiences to the envelope you receive in your parish.

Please pray for the home missions and all who live and minister in them as you consider supporting the collection this year.
Posted by Matt Palmer at 9:00 AM No comments: