Don’t you know kids aren’t interested in the Church? 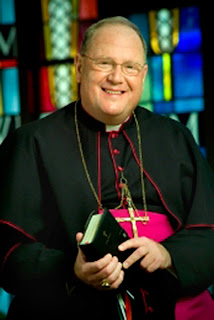 Archbishop Timothy M. Dolan of New York says being “a bit over the age limit” doesn’t deter him from seeking “this opportunity to grow closer to Christ.” This testimony by the U.S. Conference of Catholic Bishops’ president closes our “Bishops Energized for WYD series.” May all who have journeyed to WYD in Madrid have a faith-filled experience and a safe return home.

I’m going to World Youth Day first as a pilgrim, to be with our Holy Father, with fellow Catholics, and to grow in my own faith. Even though I’m just a bit above the age limit, I know that I will be moved by this opportunity to grow closer to Christ.

Secondly, I am one of over two hundred bishops from around the world who have been named “bishop-catechists,” and I am happily anticipating being able to share the message of Christ and his Church with English-speaking pilgrims from around the United States and around the world. We bishops have been asked to concentrate on St. Paul's Letter to the Colossians focusing on the theme, "Planted and Built Up in Jesus Christ, Firm in the Faith."

What do I hope the youth in my diocese and from the world get from participating in WYD? Simply put: to grow closer to Christ, to conform their lives to His Life. I also hope those attending will be confirmed in the faith, strengthened in their missionary zeal, inspired by the universality of the Church, and, on returning to New York that they will begin a new stage in their journey with the Lord in bringing the joy of the Gospel to every aspect of their work and personal life back home and with their friends.

I think all attendees will bring their own unique, personal gifts to World Youth Day—but especially those that are characteristic of youth: a zeal and energy for the faith that is contagious.

Those coming from New York will be young professionals from every aspect of our culture here: from the arts, film, theater, fashion, media, finance, and law, among others. New Yorkers will bring all of the natural gifts that they have in these professions, and unite them with the similar gifts of millions of other pilgrims from every nation, culture and background around the world.

George Weigel recounts how, when Blessed John Paul II first suggested the idea of World Youth Day, many of his advisors told him, “Forget it. It’ll be a flop. Don’t you know kids aren’t interested in the Church? It will never work, never catch on.” But what did John Paul do? He responded with his characteristic, “Be not afraid”—and of course, it was a tremendous success. World Youth Day will probably be seen as a turning point in the history of the Church. It is a vibrant, visible witness of our faith and an opportunity to grow in the faith and to meet the face of Christ in our fellow pilgrims.

Posted by Mar Munoz-Visoso at 1:39 PM

Praise God that Archbishop Dolan has been chosen as a WYD catechist! I loved and still cherish my time at WYD Sydney in 2008. It was one of the most profound experiences I'm sure I will ever have in my entire life, and a turning point in my faith journey. Thank you for sharing the words of various WYD bishops, USCCB Communications staff. God bless your work.