This is the second post in a four-part series from Stephen M. Colecchi, director of USCCB’s Office of International Justice and Peace, about his travels to Zambia, Malawi and Tanzania as part of an ecumenical delegation of Christian leaders sponsored by Bread for the World.

The human and social costs of under-nutrition in the first 1,000 days of life, from conception to age two, are staggering. In Zambia 45 percent of children are stunted; the rates are similar in Malawi and Tanzania. Malnutrition brings disease, impaired academic performance, and lost productivity. But my experience in a village in southern Malawi gives me hope. U.S. international assistance and Church action can successfully improve nutrition and bring life.

Upon our arrival, the women were dancing and singing in traditional African style, but the words were different. They chanted, “Is there nothing that WALA cannot do!” WALA is the Wellness and Agriculture for Life Advancement program funded by U.S. international assistance through a grant to Catholic Relief Services that is being implemented by the local Diocese of Chikwawa.

WALA’s strategies are profoundly simple and profoundly effective. Mothers are taught the importance of good nutrition, especially from the beginning of pregnancy, of exclusive breastfeeding for the first 6 months, and then of gradually adding complementary feeding as they continue to breastfeed until the child is two years old. 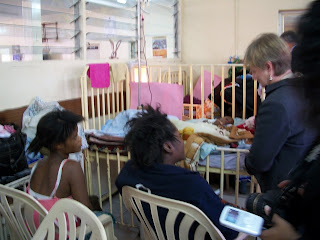 A glimpse of a pediatric nutrition ward in Malawi.
WALA introduced improved seed varieties that are more drought resistant, encouraged diversification of crops to enhance a nutritious diet, and provided a pump that enables them to draw water from their deep hand-dug well to irrigate their crops, especially new seedlings. The pump is operated by two men on what looks like a Stairmaster built for two.

Women come together periodically to prepare a porridge that is more nutritious than the traditional maize-only porridge. When we were there they proudly explained the benefits of adding in various flours that they had hand pulverized from dried beans and other crops. To remind themselves of the importance of a diversified diet, many of the women and men of the village wear dresses and shirts with a large logo depicting the various food groups.

In my next blog, I’ll say a bit about the role of fathers.
Posted by Sr. Mary Ann Walsh at 3:54 PM

Email ThisBlogThis!Share to TwitterShare to FacebookShare to Pinterest
Labels: Bread for the World, malnutrition, starvation, Zambia