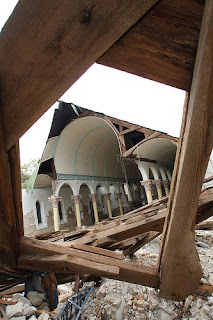 Today we mark the second anniversary of the earthquake that devastated Haiti’s capital, Port-au-Prince, and other surrounding areas, leaving behind unthinkable destruction and tremendous suffering. As we remember the victims and renew our commitment not to forget the survivors of this tragedy, it is worth noting that the implementation of the Partnership for Church Reconstruction in Haiti (PROCHE) is now fully underway. The first projects are being executed and will be soon followed by others. Momentum is building and we can anticipate much progress in 2012.

Just in the past two months PROCHE’s construction unit office (known as UOC) has processed 50 project applications and submitted 20 of them to PROCHE’s Executive Committee for review and funding recommendation. Of these, ten are currently moving forward with design and eventual construction. In November 2011, the U.S. Conference of Catholic Bishops (USCCB) approved funding for the design phase of three of those projects. Additional projects are now under consideration.

In September 2010, the Church in Haiti and sister churches, as well as donor organizations including the USCCB, agreed to create PROCHE, an entity within the Haitian bishops’ conference that would ensure all construction projects would meet requisite quality requirements. These requirements include seismic and cyclonic design criteria—as well as guarantee accountability of all disbursed funds. A construction unit was to be established with technical and accounting staff, providing PROCHE with the means to accomplish its reconstruction mission.

In November 2011, 14 months after the historic partnership was created, this vision became a reality when the UOC became functional with six technical and support staff working in a fully operational office in Port-au-Prince. This is the result of significant investments made by all the partners involved. But much remains to be done, and all of PROCHE’s partners continue their commitment to making sure that soon the Church in Haiti can see many churches, schools and convents rebuilt. Numerous plans of eventual construction projects are now being finalized so that construction can begin.

Posted by Mar Munoz-Visoso at 4:46 PM