The following is a guest blog by Mark K. Shriver, son of Robert Sargent Shriver, Jr. 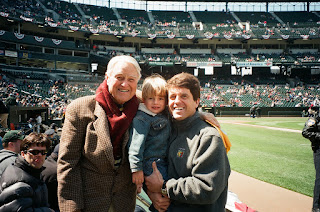 I never planned to write a book, much less a book on my relationship with my dad.  But something happened to me during the days leading up to his funeral, at the funeral itself, and in the days thereafter.

I had heard that old epithet — “a good man”— in reference to Dad so many times that it passed from a cliché to an irritant to a haunting refrain.  I had lost count of the people who had applied it to Dad when they’d reached out to me.

At first, I thought that the cliché was just an easy out, words for people who didn’t know what else to say.

But then I realized that they were taking the phrase back.  Through their repetition, if not their realization, they were redeeming words that I thought had been put out to linguistic pasture.

Some of the more startling instances came back to me as I knelt in the dark beside Dad’s coffin on the morning of the funeral.  A prominent U.S. senator who knew Dad well, yet obviously didn’t know him as well as he thought he had, told me, “I knew your dad had done a lot, but he did much more than I had known.  He was a good, good man.”

Ms. Wilson and Ms. Williams, both of whom waited in the wake line at Holy Trinity Catholic Church in Georgetown, told me that they were waitresses at Reeves Restaurant, Dad’s regular lunch spot across from his office.

And before that, Ms. Wilson had waited on him at the Hot Shoppes in Bethesda for 35 years.  They wanted to tell me that they had never met a more polite, thoughtful man in their 40 years of work.  “He was such a good man,” they said simultaneously.

I will never forget the rumble of the garbage truck outside of our house and seeing Calvin, the trash collector, standing in our driveway, trying to decide whether to walk up to the front door and knock.  I made it easy for him; I was on the lawn and went toward him.  He took off his dirty gloves, wiped his palms on his work clothes, and reached out his hands for mine.

“What a life,” Calvin said.  “I read about your dad in the paper and, man, I had to put the paper down.  I had to take a step back— whoa!  He helped so many people— what a good man!”

I also couldn’t shake my conversation with Edwin at the wake.  He worked for US Airways and had crossed paths with Dad many times during those years of travel.  Not long ago, he’d seen Dad struggling and had spent half an hour helping him get through the security line.  Edwin waited in that line at the wake, too, and told me that those thirty minutes were some of the most special ones in his life.

“I never met anyone in all my years like your father,” he said.  “He was such a good man.”

Then I thought about my kids and remembered how, two years prior, Tommy had watched Dad, Alzheimer- stricken and hobbled, grab his own cake plate after the party for his ninety- third birthday, take it to the sink, and clean it.  Tommy had looked at me, licked the icing off his last forkful, and followed Dad to the sink with his plate.

Tommy had observed, at a very young age, what a good man Dad was, right down to the smallest detail of etiquette.

The great man is recognized for his achievements.  But there are many so-called great men who are not good – they act differently when the camera lights are off; they treat the rich and powerful differently than the treat the “average Joe.”

The good man can be great in the achievement arena, too, but he is also good at home, on the sidewalk, at the diner, with his grandkids, at the supermarket, at church— wherever human interaction requires integrity and compassion.

Dad was good because he was great in the smaller, unseen corners of life.  He insisted on it in every facet of the daily grind.  Indeed, I learned that Dad’s commitment to goodness was deeply rooted in his relationship with God.  He went to Mass every day, and I mean every day, and it was that daily interaction with God that, I am convinced, gave him his boundless joy and positive energy.  And it was his faith that propelled him to treat each person and every interaction as if that person and that moment were gifts from God.  He acted so because he really did believe that everything was a gift from God.  Oh, to have such faith!

I wrote A Good Man to better understand the lessons of his life and his final struggle with Alzheimer’s — lessons about the durability of faith, the endurance of hope, and the steadfastness of love.

How had he been so faithful?  So hopeful?  And so loving?  These were the three guiding principles of his life— faith, hope, and love— and I needed to get to the source of them.

For my family and friends, for his admirers, and for me, I wanted to better understand these guiding principles so we could all try to live the same way, so I could use him as my guide as I strove to be a better man, to be as good a man as he.
Posted by Matt Palmer at 3:26 PM