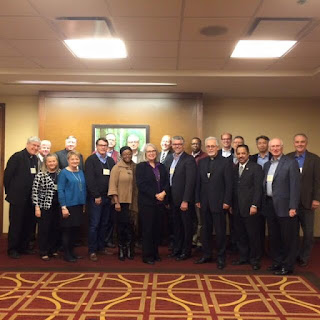 It was with much joy that I was able to attend the 10th anniversary convocation of Christian Churches Together, the most inclusive ecumenical body in the United States, last week in Arlington, Virginia. CCT was first conceived of in 2001, officially announced until 2002 and held its first meeting in 2006. One of the many gifts of CCT is to be able to pray, reflect and discuss the important issues of our time that unite us in the Christian Faith. Chief concerns of this meeting were racism in the United States, immigration and the plight of our fellow Christians in the Middle East.

Anti-apartheid leader Allan Boesak addressed our group relying on his own experiences in South Africa and speaking of how much uniting ourselves in compassion with one another is crucial to making inroads against racism. In an impassioned talk, Allan Boesak talked of the importance of coming together to honestly address the harm that racism brings not only to the oppressed, but to the oppressor as well.

We also heard about the issue of global poverty and hunger from Richard Stearns, president of World Vision, who informed us that there are currently 52 different wars and insurrections occurring in our world today resulting in 60 million persons being displaced from their homeland. These startling statistics have to provoke Christians everywhere to action, especially to those who are fleeing persecution and sectarian violence.

To look upon the issues of racism, global poverty, immigration and the plight of our fellow Christians who are being persecuted with the eyes of faith gives us great hope that, despite so many obstacles, we can unite in addressing these issues through Christ Jesus.

As CCT celebrates the past ten years of achievement through mutuality and friendship, I look forward to the coming years and all the promise of Christians working together. It is a privilege to share in such a stimulating meeting with fellow Christian leaders who are not afraid of the difficult topics that need the healing presence of Jesus Christ.

Bishop Mitchell T. Rozanski of Springfield, Massachusetts, is chairman of the U.S. bishops' Committee on Ecumenical and Interreligious Affairs.
Posted by Matt Palmer at 3:15 PM