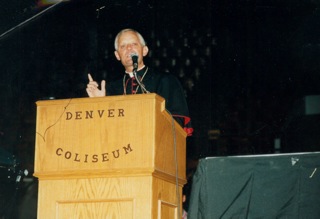 By His Eminence Donald Cardinal Wuerl

One of my favorite memories of World Youth Day is of the concluding Mass at Cherry Creek State Park during the Holy Father’s visit to Denver in 1993. The vast expanse of the park was filled with a half million young people. This was the capacity indicated by park officials. The students were clearly filled with excitement without showing signs of fatigue from their long walk and overnight vigil.

It was clear that Pope, now Saint, John Paul II connected so easily with all of these young people from their late teens on through their thirties. As he spoke at one point he seemed so reluctant to conclude and his audience kept cheering him as if they were equally reluctant to let him finish and be gone. What impressed me so much was the comfort level of everyone involved. The Pope seemed so much at ease while at the same time strongly encouraging all of the youth to live their faith. They in turn appeared eager to hear what he had to say and joyful in the recognition that the Pope was speaking to them. Later, a number of them assured me that “the Pope was looking straight at me” when he spoke. Whatever of that, it was abundantly clear that there was a heart to heart meeting and that those participants were touched by the Vicar of Christ.

That vignette and message I have used so many times subsequently in talking with young people. In a world where social pressure pulls in a different direction, it was necessary then just as it is today for all of us to hear that we should be confident of our faith, stand firm in the truth and always be proud of our faith. 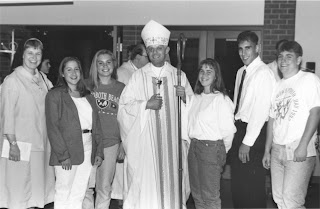 Later when I joined our group of about 600 youngsters from my then Diocese of Pittsburgh, I asked them, “Next to being with Pope John Paul II, what impressed you the most during this visit?” They were nearly unanimous in affirming that it was a great joy to be with other young people who, in their words, “Believe like we do.” One young man put it this way, “I love my faith and I was overwhelmed to see so many others my age who feel the same way.”

Those conversations highlighted for me, again, how important it is that we provide occasions for our young Catholics to come together and reassure each other of the importance of their faith. The challenges all around us are nearly overwhelming. They can be less daunting when we face them together. The images and words of that World Youth Day stay with me today. The lessons are simple, if we stand confident in our faith and speak it with love our voice can be heard and our message accepted. Together we can all grow more deeply in our love of the Lord.

Cardinal Wuerl is the Archbishop of Washington.
Posted by Matt Palmer at 9:51 AM