Tonight at the Kennedy Center in Washington, the Catholic and Jewish faiths will intermingle with history as well as art during a performance of Defiant Requiem: Verdi at Terezín, the story of the Jewish prisoners in the Theresienstadt concentration camp -- a camp used as a model by the Nazis during visits by the Red Cross and others -- during World War II who performed the Verdi Requiem as a sign of resistance against their Nazi captors.

Under the direction of conductor Murry Sidlin of The Catholic University of America, the Kennedy Center concert combines Verdi's music with testimony from survivors of the original chorus, a propaganda film about the camp, and actors speaking the words of imprisoned conductor Rafael Schaëchter and other prisoners.
One of the co-sponsors of the event is the United States Conference of Catholic, and Archbishop Timothy Dolan of New York, the bishops' moderator of Jewish affairs, will attend the eventand speak at a reception following the performance. A message from Archbishop Dolan also appears in the program: 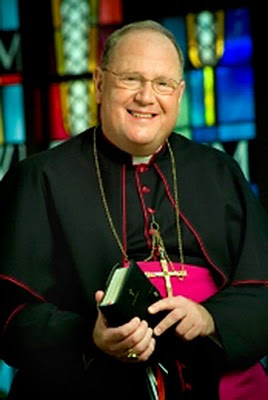 “Eternal rest grant unto them, O Lord; and let perpetual light shine upon them.” I am deeply moved tonight thinking how this prayer, so often on my lips as a Catholic priest and bishop presiding at the rites of burial, became a song of defiant hope on the lips of Jews who were facing their darkest hour. These are the words that begin and end this evening’s performance of Giuseppe Verdi’s Requiem, sung by the prisoners of the Theresienstadt Concentration Camp sixty-six years ago. The prayer belongs to the living liturgy of the Church, from which generations of Catholic believers have drawn spiritual strength. As a Catholic who daily prays the Psalms as an echo of the prayer of Jesus, I am aware that these sacred texts are both recited and heard differently between our two communities. Tonight Catholics are invited to hear these familiar prayers of the Requiem liturgy in the voices of our elder brothers and sisters in the faith as an expression of unquenchable hope.
Conductor Rafael Schächter told the choir: “We will sing to the Nazis what we cannot say to them.” The text of the Requiem assures that God’s justice will right all wrongs and that the King of Glory will deliver “the souls of all the faithful from the pains of hell.” Surely for many of the Jews living in the “antechamber of hell”—which was how Theresienstadt was described by one of the survivors—the final sequence, Libera me (“Deliver me”), was both a cry to the God of Abraham who had preserved His people many times from the forces of annihilation and a witness of the Jewish people to their collective will to survive.
The Second Vatican Council’s decree Nostra aetate (1965) may be heard as a response to the Requiem prayer sung by the Theresienstadt prisoners in its unequivocal condemnation of anti-Semitism and in its desire to renew the Church’s relationship with the Jewish people. Inspired by Pope John Paul II (d. 2005), who held out the promise that Christians and Jews might truly be “a blessing to one another,” may our listening together to the Defiant Requiem become a fruit of that blessing and a sign of hope to the people of our age.
Posted by Don Clemmer at 1:31 PM