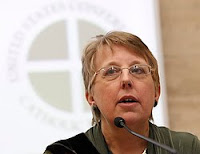 The Vatican’s Pontifical Council for Social Communications brought together 204 delegates from 85 countries Oct. 4-7, 2010 to discuss Catholic print publications and the impact of the “new media” (the Internet and social networking sites) on their work.

While the Italians, French, Germans and Americans had some of the larger delegations, the diversity of the experiences of Catholic journalists in areas such as India, Africa and Latin America enriched the conversations. And, despite our diversity, several common themes emerged in the three and half days that we met. We were divided into small groups by languages and geographical regions for discussions following most plenary sessions. There were 11 small groups: four English, two each in Italian, Spanish and French, and one in German. It was obvious that English is becoming the global language, even in a Church that proclaims Latin as its preferred universal tongue. Interestingly, half the time the Germans reported out to the full assembly in English, since, as the reporter said, “it would be faster.”

The week began with a presentation by Amy Mitchell of the Pew Research Center’s Project for Excellence in Journalism. Mitchell explained what the Americans already knew: print publications are in serious trouble in the states, and, while the web and all its components didn’t begin the decline in readership for them, it seems to be accelerating it. Other presenters indicated that, while print publications may still be healthy in Europe and actually growing in developing nations, as literacy rises, the implications of an Internet-driven society is that it won’t last long.

Catholic journalists and communication professionals also noted, both in the formal presentations and in reports from the small group discussion, that they are fettered in their work by bosses who fail to understand the implications of not reporting both the good and the bad news. It was encouraging to hear the French Bishop Stanislas Lelanne tell us, while he expects us to deeply love our church, that does not mean that we become “the voice of our master.” He also said that he thought it was a good thing that readers don’t always agree with what they read in their Catholic publications. If there is no debate in a Christian community, it is not a true community, he said.

Other speakers repeated the need for the Church to use its media outlets as places for conversations and dialogue to occur, both among Catholics and with the larger community. We were reminded that in some parts of the world, especially in Asia and Africa, both the Church and the marginalized are still actively persecuted and oppressed. The Church has to serve as the voice for the voiceless, speakers said again and again. Sometimes this means giving voice to those who are oppressed by church leaders. One Polish editor explained that we have to help bishops understand that their Catholic publications are not to serve as “talking mirrors,” telling him that he is the fairest prince in all the land. (I am sure some of these quotes were better in their original language.) This concern, raised again and again, was even more remarkable, in my opinion, since all of the delegates were selected by their episcopal conference and therefore would be considered “loyal” church workers.

It seemed that a majority of the participants were also eager to use social media, such as interactive websites, Facebook, Twitter, etc., to engage their populations. Some noted that there, too, they experienced resistance from their bishop-publishers because of fear of criticism and dissent. But those who have been at work in the blogosphere and other social media networks see the potential good outweighing the risks. Across Europe, North America and Oceania readers of print publications are aging. Websites and social media, however, are attracting younger audiences. These younger Catholics are eager to explore their faith and embrace it, and the only way they know to do that is to discuss and challenge their own ideas and others’ opinions.

A presentation by a Dominican priest from Africa showed the rapid deployment of submarine fiber optic, which is giving the African continent as fast and reliable access to the Internet as the rest of the world. It highlighted the fact that the digital divide is rapidly turning into a digital bridge and that the Church in Africa needs to breach the gap and engage in social media as its younger members embrace it.

Finally, the third major theme I observed was a sense that Catholic media have a role that is unique among media. It might be best expressed by a quote from David Quinn, an Irish journalist: “We have to offer an ethic of self-sacrifice and commitment, as opposed to the ethic of individualism” that seems to permeate so many societies, including Western democracies.

This was expressed in several ways: calls for an emphasis on a message of Christian hope, challenging people to work for the common good, to give voice to the voiceless, to present the Gospel in a way that is accessible to today’s attention-deficit-ordered news consumers, to use the professional standards and ethics we learned in journalism school, to face off against the growing and cynical news-as-entertainment mindset, and to provide positive stories about people rising above great suffering and oppression, both in secular Western societies and in non-Christian developing nations.

Telling the Christian message of hope is challenging and necessary, Archbishop Claudio Celli said in his remarks that closed the formal session. But before we do that, he said, Catholic journalists need to challenge our personal vision of the Church. If the Church is going to serve humanity, he said, it must be a place for dialogue and respect, not an institution that attempts to dominate or to condemn. We have to be good listeners before we can be good communicators, he explained. Once we know what is in the heart of humanity, Catholic communicators can speak to that heart, allowing dreams and hopes to be realized. That, he said, is daring to be a prophetic voice for the world.

If you're interested in more information, Catholic News Service carried several stories on the Congress.
Posted by Helen Osman at 8:28 PM

Well done Helen. It sounds as the ough the conference was an exstention of the same conversation happening here in the U.S. between the catholic press and our bishops. I hope that we can embrace the change we need to to remain an important voice to the present and future generations.

In order for any changes to have any credence with the Laity, all statements must fully conform to the "Catechism of the Catholic Church, Second Edition" without any politcal or personal bias. The CCC is easy to understand for anyone over age 15.

Unless the "CATECHISM of the CATHOLIC CHURCH, Second Edition" is the basis for all statements without taking anything out of context, the Laity will always be doubtful. The "CCC 2nd Ed" is the Doctrine of our Faith and Morals, and easy to understand for anyone over age 15.