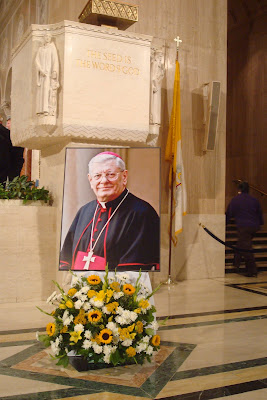 Over 85 U.S. bishops -- including seven cardinals -- gathered at the Basilica of the National Shrine of the Immaculate conception in Washington today for a memorial Mass for the late Archbishop Pietro Sambi, apostolic nuncio to the United States, who died July 27.
Archbishop Timothy Dolan of New York, president of the USCCB, celebrated the Mass and gave the homily. Upon the nuncio's death, Archbishop Dolan called Archbishop Sambi -- who served as nuncio from December 2005 till his death -- a friend of the Church in the United States. The turnout at today's Mass suggested that a good many people -- bishops and not -- agreed.
The presence of the diplomatic community and other dignitaries, including Vice President Biden, reflected the nature of the work of an apostolic (or papal) nuncio.
Some background:
The apostolic nuncio is the closest thing the Vatican has to a ambassador, except unlike an ambassador, which represents his or her country, a nuncio is the personal representative of the pope. So along with his diplomatic duties, the work of a nuncio involves being the eyes and ears of the pope, making recommendations to Rome for bishop appointments. 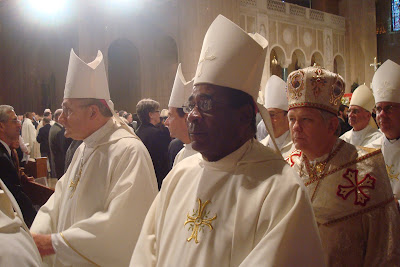 In this light, Archbishop Sambi's five-and-a-half-year tenure was greatly influential in shaping the U.S. Catholic hierarchy. Dioceses to receive new leadership on his watch included Washington, Baltimore, New York, Los Angeles and Philadelphia, as well as Seattle, Detroit, Milwaukee, St. Louis, New Orleans, San Antonio, Cincinnati, Louisville, Miami and Pittsburgh. This is quite a footprint.
It's worth noting that Archbishop Sambi's death comes only a few years after the deaths after not one, but two of his predecessors as nuncio to the United States.
On January 10, 2009, Cardinal Pio Laghi, nuncio to the United States from 1980-1990, died in Rome. During his tenure, Laghi established full diplomatic relations between the United States and the Holy See, making him this country's first actual nuncio (his predecessors were called apostolic delegates). After his time as nuncio, Laghi returned to Rome where he was made a cardinal and became Prefect of the Congregation for Catholic Education. His successor (Cardinal Agostino Cacciavillan, U.S. nuncio from 1990-1998) was also made a cardinal after finishing stint in the United States, and it was widely held that Archbishop Sambi was bound for a Vatican post and a cardinal's hat before his untimely death.
Eleven days after Cardinal Laghi's death, his predecessor, Archbishop Jean Jadot, died at age 99. Jadot served as apostolic delegate to the United States from 1973-1980, and true to form of being the pope's eyes and ears, his nickname was "Paul's Man in Washington."
They are followed all too quickly by Archbishop Sambi.
Posted by Don Clemmer at 8:53 AM