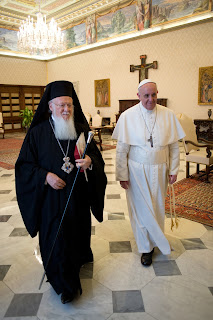 Pope Francis met today with representatives of Christian churches, ecclesial communities and other world religions who had come to Rome for his inaugural Mass. He received them seated on an armchair at floor level, rather than on the customary raised throne.

After he was greeted by Ecumenical Patriarch Bartholomew of Constantinople, Pope Francis thanked him for his remarks, referring to him as “my brother Andrew.”  This was significant because Andrew is the patron saint of Constantinople and Peter is that of Rome; the two represent two ancient churches who are trying to retrieve the fraternal relationship that the two brother apostles had.  This was most probably the first time ever that an ecumenical patriarch was present at the inaugural Mass of a pope.

Pope Francis recalled the significance of the Second Vatican Council for ecumenism, and quoted Pope John XXIII who said at the opening session of the council, “The Catholic Church considers it her duty to actively work so as to bring about the great mystery of that unity for which Jesus Christ prayed so ardently to His Father in heaven on the eve of his sacrifice.”  He went on to say that, “For my part, I wish to assure you, following in the path of my predecessors, of my firm will to continue on the path of ecumenical dialogue.”

The new pope also reminded the representatives of the Jewish communities of “the very special spiritual bond” that links Jews and Christians.  He quoted from Vatican II’s Decree on Non-Christian Religions, which states:  “The Church of Christ acknowledges that, according to God's saving design, the beginnings of her faith and her election are found already among the Patriarchs, Moses and the prophets.”  The pope said that he looked forward to the continuation of the fruitful dialogue that has accomplished so much in recent years.

The Holy Father then turned to the representatives of other world religions who were present, especially the Muslims who, again quoting the Council, “adore the one, living and merciful God and who call upon Him in prayer.”  He said that the Catholic Church is– and he repeated this twice for emphasis – “aware of the importance of the promotion of friendship and respect between men and women of different religious traditions.”  He went on to say that the Church “is also aware of the responsibility that we all bear to this our world, to all of creation, which we should love and protect. And we can do much for the good of the poorest, of the weak and suffering, to promote justice and reconciliation, to build peace. But, above all, we must keep alive the thirst for the Absolute in the world, not allowing a one-dimensional vision of the human person, in which humanity is reduced to that which it produces and consumes, to prevail. This is one of the most dangerous pitfalls of our times.”

In this brief address, Pope Francis has made it clear that he intends to continue the path of dialogue that the Catholic Church has followed since the Second Vatican Council.

Father Ronald Roberson is associate director for the Secretariat of Ecumenical and Interreligious Affairs at the USCCB.

Note: The USCCB’s Secretariat for Ecumenical and Interreligious Affairs has received many messages of hope and support for Pope Francis. We have posted excerpts from these, as well as a sampling of statements from world religious leaders internationally.

Watch a Catholic News Service video on the meeting: