The Papal Transition: The Conclave Begins 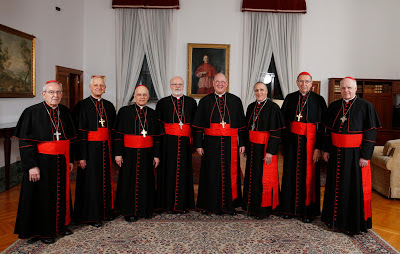 I was up early to see the cardinals off to the conclave. Paul Haring of Catholic News Service arrived before 6:30 a.m. to set up the room for the class photo of the eight cardinals who left from North American College: Cardinals Daniel DiNardo, Timothy Dolan, Francis George, Roger Mahony, Edwin O’Brien, Sean O’Malley, Justin Rigali and Donald Wuerl.

We sought a measure of decorum so we advised the mostly photographers and a few pencils that there would be no shouting questions. I jokingly added if any did I would tackle them. The photographers thought that was a great idea. Seminarians lined the road and clapped as the bus rolled down the driveway. It’s a rainy day, but the rain stopped briefly when the cardinals boarded their bus.
Don, Mar and I got great seats for the Conclave’s opening Mass and were in a section to receive Holy Communion from the celebrant, Cardinal Angelo Sodano, dean of the College of Cardinals. The feeling at the liturgy was solemn, not excited like a U.S. election experience. Before Mass we prayed the Rosary and sang the Salve Regina. Cardinal Sodano’s homily drew sustained applause when he mentioned “the beloved and venerable Pontiff Benedict XVI, to whom we renew in this moment all of our gratitude.”

When he spoke of Christ giving himself to the apostles, prophets, evangelists, pastors and teachers “to equip his people for works of service, so that the body of Christ may be built up” thunder rumbled in the skies. It seemed like a resounding emphasis of the homily theme of service and of papal ministry built on efforts of previous popes so that “the future pope may continue his unceasing work on the world level.” Mass was in Latin but the Mass booklets had translations in English and Italian. Apparently regular use of English in the Mass booklets at St. Peter’s began a couple years ago.

Roman flexibility exhibited in the basilica when about 12 vested priests couldn’t find seats. The usher simply told two rows of us who were already seated to move our chairs back. Because we were in the back row of the section, I was afraid this would become a trend and we’d move ourselves out of our section. But luckily we only had to make one extra row.

We left by a side door, which turned out to be the cardinals’ egress too. One young man from a Roman junior seminary stood outside with a glossy sheet of pictures of the electors from the L’Osservatore Romano newspaper, and cornered cardinals to sign their photo. He was energetic and odds are that he got a papal signature for his work. Among those I saw signing their pictures were Cardinal Francis George of Chicago, Cardinal Timothy Dolan of New York, and Cardinal Luis Tagle of Manila. The cardinals were heading to the nearby domus sanctae Marthae, their residence during the Conclave, and a number of people greeted them as they went home for lunch. I didn’t identify any reporters in the area. 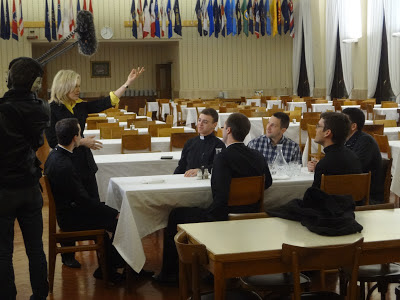 Last night ABC’s Diane Sawyer stopped at North American College to meet briefly with one of ABC’s commentators, Archbishop Wilton Gregory of Atlanta, and to get a feel for the college. She overheard seminarians warming up for choir practice with “I got rhythm.” Archbishop Gregory assured her it was not an opening hymn for Mass.
--

Sister Mary Ann Walsh is the media relations director for the USCCB.
Posted by Matt Palmer at 3:00 PM

Monsignor Guido Marini ordered everyone out, and-- shut himself in! :)