A small but powerful whirlwind blew through Washington a few weeks ago in the person of Cardinal Jean-Louis Tauran, President of the Pontifical Council for Interreligious Dialogue. His visit included major addresses at the Nostra Aetate Symposium at the Catholic University of America, and at the Georgetown University hosted conference The Second Vatican Council: Remembering the Future. His itinerary included visits with Hindu, Jain, Muslim and Jewish leaders.

During the visit, he reviewed the Declaration on Interreligious Dialogue [Nostra Aetate] for its 50th Anniversary, visited local communities, encouraged local and national dialogues and set an agenda for the future. 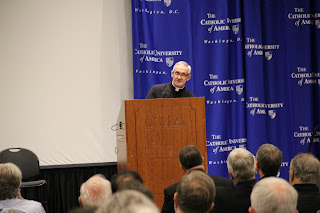 I heard his Catholic University address “The Catholic Church in Dialogue with Islam since the Promulgation of Nostra Aetate” on Tuesday evening May 19th. In it the Cardinal:

• Reminded us that Islam is simultaneously a religion, a political system and a civilization;

• Recalled that Nostra Aetate did not begin dialogues—these began centuries before—but that it pointed to a “a more positive attitude towards and a constructive relationship with the followers of other religious traditions.”

• Noted that we cannot be passive as our Muslim brothers and sister struggle with modernity, religious liberty, and a host of other issues. Our presence must be one of friendship and support in the midst of the struggles of our neighbors.

• Suggested that we are entering a new period of Muslim-Catholic dialogue where Catholics in all parts of the church will need to learn more about Islam and where Muslim-Catholic theological reflection will become more prominent.

Cardinal Tauran also led by example. He met informally with Muslim leaders while at the CUA Symposium and he joined Cardinals Koch and McCarrick, Bishops Rozanski and Madden in conversation with Jewish leaders. The following weekend he dialogued with Hindu and Jain leaders at their temples and shared a meal with them. I joked with him that he had more pictures taken of him with interreligious friends during this visit than the Pope has on one of his trips!

Despite jet-lag and non-stop speeches/conversations, Cardinal Tauran exemplified the genuine humanity and the perseverance that are essential as we move into deeper relationships.
---