Countdown to World Youth Day: "It Could Have Been A Mess!" 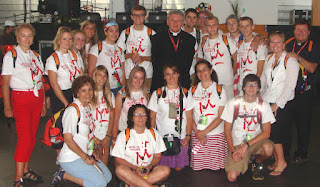 By  Bishop David A. Zubik

As Pittsburgh pilgrims, there are so many wonderful memories connected with World Youth Day over the years. But one memory stands out, perhaps because it could have been—should have been—a disaster but was anything but!

It was my first year as Bishop of Pittsburgh. I was leading a contingent of 600 young people from the diocese. We were ready to depart on July 14, 2008 to Sydney, Australia for World Youth Day. The Pittsburgh diocesan youth group was to be the largest at World Youth Day outside the host country.

There were about 400 of us who arrived at the airport in Pittsburgh at 3:00 a.m. for our chartered departure to Sydney. As you can imagine, the scene was a little festive, a lot noisy. Then the news came. Our flight was going to be delayed. And delayed. And delayed. In the end, it would be eighteen hours before we finally took off.

It could have been a mess. Imagine 400 bored young people stuck in an airport for hours on end with nowhere to go and nothing to do. But the Holy Spirit was not going to allow this World Youth Day pilgrimage to get off to a bad start. The Spirit had other plans! 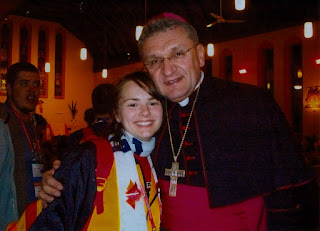 It began with the decision to use the time to begin our pilgrimage with the celebration of the Mass. Almost immediately, the Mass began to draw us together as true pilgrims. We were not just leading young people from scattered parishes, bringing them together for a “trip.” We were pilgrims coming together—leaders and young people—as a spiritual family. I spent two hours hearing confessions.

Later, with the seminarians who were taking part in the pilgrimage, we put on a skit as part of a talent show organized to pass the time. It was fun. It was laughter. It was getting to know each other. It was learning to serve. It was prayer.

Long hours waiting in the airport had become the perfect beginning to our World Youth Day pilgrimage.

There were so many wonderful moments that we shared in Sydney. I remember over 270,000 gathering for the Stations of the Cross in downtown Sydney. I remember the Pittsburgh delegation coming together for a Holy Hour and Benediction in a place called Broken Bay. I remember greeting each pilgrim as we boarded the plane for home. I remember saying good bye with a blessing as we landed in Pittsburgh. 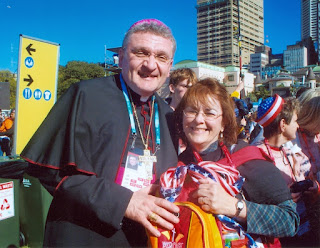 I had told the pilgrims in Sydney that, when they left World Youth Day, they must go out as servants.

It was an easy message to share. After beginning our pilgrimage with eighteen hours at the airport, it was a message well understood. Truly a gift of the Holy Spirit to us Pittsburgh pilgrims!