Countdown to World Youth Day: Moved By The Holy Spirit 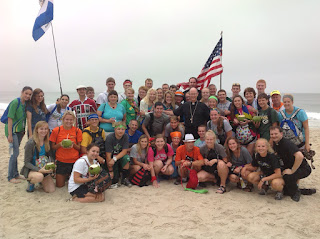 The sun rose over Copacabana beach in Brazil, on a warm Sunday morning in July 2013. Three million young people assembled along the water’s edge. I was on the beach with them that day. We were preparing for the closing Mass of World Youth Day 2013, celebrated by Pope Francis, less than six months into his pontificate.

I’ve been to World Youth Day many times, but Denver will always stand out. John Paul stood among millions of young people here in the United States, and told us not to be afraid. He told us to go out into the streets and proclaim the Gospel. He told us to defend life. He told us to become saints. He called us to the New Evangelization.

I look forward to traveling to Krakow in 2016. With young people from the Diocese of Lincoln, I’ll travel as a pilgrim to the homeland of Pope St. John Paul II. We pilgrims will rely on the Providence of God as we travel, and we’ll look forward to gathering with the Holy Father, and with young people from countries around the world. We’ll pray together for St. John Paul’s intercession. We’ll celebrate the Holy Sacrifice of the Mass. We will journey to Krakow to experience the universality of the Church’s life.

I’ll never forget the experiences I’ve had at World Youth Day. I’m sure that Poland will be an unforgettable experience as well. I’ll travel there as a pilgrim, seeking a deeper union with Christ and His Church. I pray that you will be a World Youth Day pilgrim, too.
Posted by Matt Palmer at 2:01 PM