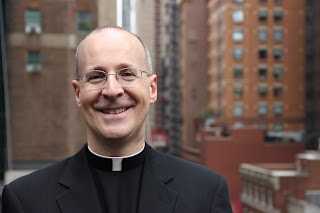 By Father James Martin, SJ
It’s hard to sum up in a few words what men and women religious have meant to me.  But let me use two words that I’ll bet you’d use too: Thank you.

Thank you to Sister Janice, a Religious of Jesus and Mary, who was my church history professor during graduate theology studies, and who has become a close friend to my whole family. Ten years ago, when my father was first diagnosed with cancer, Janice was one of the first people to telephone him to offer support and prayers. And in the last week of his life, she took a train from to (that’s about a six-hour trip) to visit him while he was in the hospital. Like all Catholic sisters, Janice has taken a vow of poverty and lives on a limited budget. So to visit my father, she took the cheapest train she could find and stayed at a local convent. The next day she got back on the train and returned to , another six-hour trip. I don’t think I can ever thank her enough.

Thank you to Sister Maddy, a Sister of St. Joseph I met when I was working in East Africa and she was helping, with two other Sisters of St. Joseph, to run a girls school in a remote village in Tanzania (That meant no water, no electricity, no phones.) Today, she is a retreat director at a Jesuit retreat house, beloved by people from all over the country, whom she helps with wise spiritual guidance. During one retreat, she led me through a particularly tough time, balancing our friendship and her professional role as a director. Lately we’ve directed weekend retreats together, and I always learn something new about God when I listen to her. I can never thank her enough either.


Thank you to Sisters Claire and Eileen, Maryknoll Sisters who lived across the street from our Jesuit community in Nairobi, while I was there for two years. Both had spent years working in the most difficult settings imaginable in , and these two elderly sisters provided me with a model of indomitable religious fervor. Often, when I was homesick, I would pop by their house for a cup of tea and some cheering up. “Oh you’ll be fine!” both would say. And they were right.


Thank you, too, to all the Jesuits who have helped me in life, and who are too numerous to name. But I’ll give you a few! Thanks to David, my first-ever spiritual director, who helped me discover what it means to be loved by God as you are. Thanks to John, one of the true saints I have known, who showed me what it means to live with an open heart, a generous spirit and a love of simplicity. Thanks to George, who helped to support my vocation during a difficult time with his patient spiritual counsel.


I’m sure you’d like to say “Thank you” to the men and women religious who have made a difference in your life. And I’ll bet you’ve probably dropped them a line or told them in person. But did you know that their religious orders are facing a severe financial crisis, and are finding it hard to care for these great men and women in their declining years?

Men and women religious – particularly the women - typically worked for very little (sometimes a literal pittance); they lived exceedingly simply; and many of their communities were not able to save much at all, thanks to these historically low salaries. Also, there are fewer young people entering religious life, which means that fewer religious men and women are earning salaries, which means that the older religious are having a difficult time making ends meet.

This is where you can really say thank you! Why not give to the Retirement Fund for Religious? I know they would appreciate it. I’ll bet God would, too.


James Martin, SJ, is a Jesuit priest, contributing editor to America and author of many books, including My Life with the Saints, The Jesuit Guide to (Almost) Everything and Between Heaven and Mirth: Why Joy, Humor and Laughter are at the Heart of the Spiritual Life.

Editor's Note: To contribute to the Retirement Fund for Religious, visit: http://www.usccb.org/about/national-religious-retirement-office/ or www.retiredreligious.org