Five Things to Remember on July 24 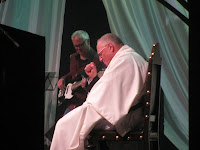 1. Cardinal Timothy Dolan, president of the U.S. Conference of Catholic Bishops, drew a standing ovation after speaking with young people at a catechetical session at World Youth Day July 24. Speaking about being patient with the time it takes to discern God’s will, Cardinal Dolan noted: "We like a microwave, God prefers a crockpot."

2. For World Youth Day, all Catholic News Service stories, videos and photos — quite good — are available online. The full texts  of Pope Francis’s  remarks — and eventually of all his talks — can be found on the Vatican website.

3. Some church collections suggest an improved economy and continuously generous Catholics. A look at the 2012 numbers, for example, show they were up from the previous year for the following collections: Catholic Campaign for Human Development, Church in Latin America, Church in Central and Eastern Europe, Catholic Home Missions, and Solidarity Fund for Church in Africa.