The Pope's Instructions for Building a City of Love 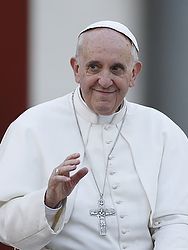 Pope Francis, as pontifex maximus, is called to be a bridge builder. But his first encyclical, Lumen Fidei (Light of Faith) suggests he's a city planner too. Faith, the pope says, compels us to build a city that is rooted in relationship with God and one another.

Faith is not about a "completely private relationship" between the individual believer and God, he says. It is instead about "we" as a Church community called to be together in relationship with God, one another, and the world around us.

The Church celebrates the sacraments as a living community whose faith is communicated across generations of witnesses. At baptism, we become a member of this community, embracing a new way of living and acting. We celebrate the Eucharist together and encounter Christ's self-giving, which we strive to imitate. We recite the Creed as a united body, and then we go out to live God's commandments of love as set forth in the Sermon on the Mount (Mt. 5-7) -- in which Jesus calls the poor, meek and merciful blessed, and in which all are called to be salt and light to the world.

Pope Francis reminds us: faith doesn't "draw us away from the world or prove irrelevant to the concrete concerns" facing humanity. Rather, it calls us to follow the example of St. Francis of Assisi and Blessed Mother Teresa who drew near to those who suffer.

What does this mean for us during the Year of Faith, a year in which we are called to faith, worship and witness?

It means allowing the power of God's love to "penetrate to the core of our human experience." It means celebrating the sacraments -- and then living sacramentally by being people who are poor, merciful, seekers of peace and righteousness, and salt and light to the world. The USCCB Department of Justice, Peace and Human Development has new resources that can help us do so.

It means, again, being attentive to human suffering and responding in the model of St. Francis, Mother Teresa and so many other saints.

It means working to care for creation, and striving for development that prioritizes human dignity and care for creation above "utility and profit." It means ensuring that government serves the common good.

As Pope Francis says, the light of faith "does not simply brighten the interior of the Church, nor does it serve solely to build an eternal city in the hereafter." It challenges us to build societies now that reflect God's vision of justice. Let's begin now!

Rauh is assistant director of education and outreach for the Department of Justice, Peace and Human Development of the U.S. Conference of Catholic Bishops.

(CNS Photo/Paul Haring)
Posted by Don Clemmer at 10:47 AM