When Your Phone Becomes Your Prayer Book 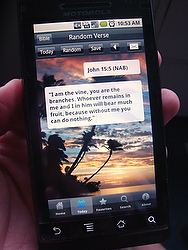 Many media snickered when the Vatican announced that people who followed the World Youth Day pilgrimage via social media could derive the same spiritual benefits earned by those present in Rio de Janeiro for the international church event. Were they worried that it made a spiritual effort too easy?

Certainly tuning in on social media is a far stretch from the work of Chaucer’s pilgrims of the Canterbury Tales. But from the church’s standpoint, social media allows World Youth Day to include those who could not travel to walk alongside the youth on pilgrimage.

Going social media follows the church’s tradition of keeping up with the communications arts. No surprise here. In the mid-eighties, the Vatican announced people could receive the pope’s Urbi et Orbi (To the city and to the world) apostolic blessing on Christmas and Easter via TV without standing in St. Peter’s Square. Earlier in that century the church moved into the then new medium, radio. Guglielmo Marconi considered the inventor of the new medium, launched Vatican Radio in 1931. The worldwide service now airs in 47 languages. Voice of America went on the air in 1942.

To bring the Gospel into people’s lives, the Church has no choice but to engage with contemporary media. Given what some consider the usual glacial movement of the Holy See – when you’re 2,000 years old, why hurry? – the Church has entered social media with lightning speed. After all, the World Wide Web only took off in the mid-nineties. Facebook was born in 2004; Twitter in 2006.

The church searches for ways to use media for its mission. For those who want a few moments with Scripture, for example, the U.S. bishops accommodate them with daily readings and a meditation on them via www.usccb.org/bible. For those who want to spend more time with daily prayer the Irish Jesuits have Sacred Space at www.sacredspace.ie. Such media aids have replaced the prayer books of a generation or more ago. For many, iphones have become prayer books. One may not find the same religious sensory appeal in holding an iPad as in holding a Bible, but that downside may be offset by the accessibility to Scripture found on the Web.

Church entrepreneurs have developed apps for everything from the rosary to the Divine Office. (Caution: Don’t judge someone looking at his phone before Mass – he may be praying the Liturgy of the Hours, as the Office is called.)

Pope Francis tweets virtually every day with challenging and inspiring messages. USCCB shares them via USCCB Facebook and Twitter accounts. It’s a spiritual boost from the man who is charm the world with his down-to-earth spirituality. It’s also a connection with the Vicar of Christ.

Believers accept the fact that God is everywhere. It shouldn’t surprise us when God shows up in social media.

I'd love to know what app that is in the picture... none of the Bible apps I've used are that pretty!

Personally, I love having Catholic apps on my phone. I use YouVersion (a Bible program) and Bible Diary (gives daily mass readings) often. I can sneak in a few minutes of Bible reading here or there in waiting rooms, listen to it while driving, etc.

I read my Magnificat on my iPad. I even put my prayer intentions on the yellow notebook app. No more lost holy cards and sticky notes!

Just be cautious. A parishioner recently complained to me that she just came back to the Church and at her first Confession back the priest was "on his iPhone during my confession." Knowing that our pastor uses his phone in place of a traditional brievery, I explained the situation and the frustration immediately left her. I am just grateful that she brought up the issue to me.