Journal of a Soul 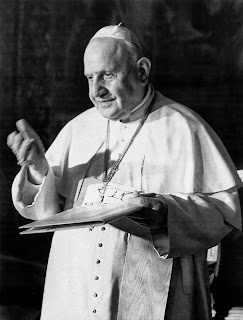 
Rereading Pope John XXIII’s Journal of a Soul decades after its initial appearance in 1965 can be a transforming experience. One encounter with a saint can change us. But reading the saint’s personal reflections from his earliest days as a teenage ‘seminarist’ until a few months before his death presents numerous opportunities to pause, pray and compare our own spiritual journey to his.

Angelo Roncalli’s early daily entries in his spiritual journal show his lifelong dedication to the pursuit of holiness. They also show that he was a beginner, as much concerned with accomplishing the spiritual exercises as with their content. Extended spiritual reflections on the Scriptures and on the points made at his yearly retreat come later. This is exactly what we might expect. Most likely we have experienced these steps on the spiritual journey ourselves.

I should note that Pope John was very dedicated to his spiritual exercises, to having a structure of prayer. This is an important discipline he pursued throughout his life. He celebrated the Eucharist and was devoted to Christ; he examined his conscience daily; he liked to pray the rosary; and he made a yearly retreat. His piety was deeply rooted in the Catholicism of his times. I believe that these deep spiritual roots enabled him to see the contemporary situation clearly and to become an agent of necessary renewal in the church.

A number of constants stand out:

· He was a man who lived the joy characteristic of the Christian.

· He practiced humility throughout his life, for example as he persevered in difficult diplomatic assignments.

· He believed in “waiting on God” rather than acting impulsively.

· He sought to imitate the saints and often called upon their assistance.

· One of his ongoing favorites was the patron of my religious community, St. Francis de Sales. “I have read his life so many times. ....By the light of his example, I feel more inclined towards humility, gentleness and calm,” he said.

I find some of Pope John’s difficulties consoling as well. He was distracted in prayer; he was disquieted in not being able to keep up on all he had to do; he kept falling into the same faults. He saw himself, even towards the end of his life, as a sinner. But he also saw himself as a person who asks for forgiveness regularly, relies on God‘s mercy, and is preparing for eternity.

I found that in working my way through John XXIII’s writing that his tranquility of spirit was transferring to me. “He who is always in a hurry, even in the business of the church, never gets very far,” he said. I am praying that this peaceful spirit remain with me.

After reading Journal of a Soul, I realize why I never finished reading it the first time. I stopped at the point where I could not relate to his reflections. I didn’t have enough experience and understanding to grasp what he was talking about. Now I can compare my experience to his—and learn from his wisdom.

His wise judgment, rooted in his deep faith, prepared the way for the Second Vatican Council. Through this joyful and humble man, the Holy Spirit set the Church on a new path.

Put your heart, mind, and soul into even your smallest acts. This is the secret of success. See the link below for more info.

Put your heart, mind, and soul into even your smallest
acts. This is the secret of success. See the link below for more info.