Pope Francis and The Disposable Garment 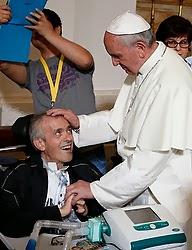 Pope John Paul II, to be canonized on April 27 by Pope Francis, was one of many people who've decried a "culture of death" in recent decades. The description was warranted, but Catholics also believe that natural death is a part of life and can be beautiful and dignified.

So Pope Francis offers an alternative view, in which the problem isn't so much death as it is "a culture of waste," in which everything, even human beings, are treated as disposable commodities when they are no longer "useful." Pope Francis tied this mentality to throwing away excess food at his June 5 general audience and later on Twitter, saying that "throwing food away is like stealing it from the poor and hungry." He revisited the "throwaway culture" July 22, en route to Brazil for World Youth Day, this time using the term in reference to society's treatment of young people. He invoked it yet again on September 20, regarding abortion.

The late Cardinal Joseph Bernardin of Chicago brought together disparate voices in the Church by showing how our teachings fit together in one "seamless garment." Pope Francis offers the flip side, how the Church's teachings fit together even when the world ignores them. "Pope says wasting food is a sin" may make for entertaining headlines, but it misses the genius of the cohesive Catholic vision Pope Francis offers the world, of how much Catholic teaching can be encapsulated in this "disposable garment."

It applies to how we relate to:
Benedict XVI frequently emphasized all the Church says yes to, because Christianity ultimately is a positive proposition of God loving every person and drawing the entire world to himself through Jesus. For Pope Francis, this means saying yes to a "culture of encounter." To overcome a throwaway culture, every person must go out into the world, encounter other people as more than commodities, and learn to treat everyone with the dignity they deserve. For Catholics, this pervades the teachings of our Church and is fundamental to our ability to encounter Jesus Christ.

Bishop Wester is bishop of the Diocese of Salt Lake City and chairman of the Communications Committee of the U.S. Conference of Catholic Bishops.