From Kissing Elvis to Mother Superior 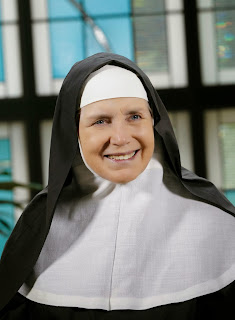 Religious life is meant for all who seek God no matter what they believe is their calling or vocation. But we have come to think this term defines a vocation to a particular religious order. I make the distinction because as I look back on my life, as I am doing in relationship to my book, “The Ear of the Heart,” I realize that I was seeking God or a “religious life” during my entire life.

At a very early age, six or seven, I was convinced that what I truly wanted was to be an actress. But now as I understand the depth of that call, I find I was really looking for a way to genuine communication between persons.

I grew up amidst human conflict. My parents divorced three times, marrying twice to try to find an answer to their problem of communication. As an only child I tried to know what the struggle was about. It drew me to listen more intently than my years might expect. And as I grasped the gap I witnessed between persons I learned to call on a greater Father who could intercede for me. It was an instinctive level of religious response, appropriate for my age.

My young life was complex. I was eventually separated from my mother, living with her only during summer vacation, until she remarried into a Jewish family when I was 11. Then I went to live with them in California, separating me from my grandparents whom I had come to love and who had in many ways become “parents” to me for 11 years. Fear of separation, cut deeply. And yet this proved to become a new opening for the call from God to hold deep affections in prayer to unite seeming opposites.

The Lord had His plan in drawing me as a teen to the San Fernando Valley, a few miles from Paramount Studios, MGM, 20th Century Fox and Columbia Studios.

Through an incredible stroke of luck I was chosen among many blue-eyed blonde hopefuls to play opposite Elvis Presley in “Loving You.” Our closing kiss would become a prayer in the hearts of many teenage girls for the next 50 years. It would plunge me into a fantastic film career playing with every major movie star in those naïve and wonderful years as a Hollywood adolescent. Indeed it was a flowering of my vocation to communicate with an adoring public.

It also opened my own heart to encounter the full meaning of the word “vocation.” In the shocking gift of God’s generous flow of grace, I was finally aware of the true meaning and call put before me. The extravagance of my Hollywood career only mirrored the extravagance of God’s creative love expressed through His Son. Truly the Lord was the actor “par excellence” born into the stage of human experience. I knew my own religious vocation had to be lived in the face of this truth. This became incarnate for me as I discovered the Community of Regina Laudis, in Bethlehem, Connecticut. Here I found Jesus Christ.

My vocation was never a matter of leaving Hollywood. Hollywood taught me to be an actress. Regina Laudis helped me to live the part for which I was born, within a monastic vocation.

Mother Dolores Hart, a Hollywood starlet who became a cloistered nun, is author of The Ear of the Heart: An Actress’ Journey from Hollywood to Holy Vows.