From One Francis to Another 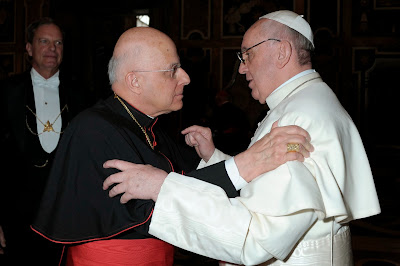 Cardinal Francis George, OMI, had a vivid reaction when he heard Cardinal Jorge Mario Bergoglio, SJ, take the name Francis: "That's my name!" he later told the media, with a laugh.

The cardinal archbishop of Chicago is a Francis who is also a George. The pope is a George [Jorge] who became a Francis. And more than a couple people briefly thought the new pope was from Chicago when they heard the names "Georgium" and "Franciscum" announced from the balcony of St. Peter's Basilica.

Cardinal George celebrates his 50th anniversary as a priest this month. Reflecting on this in the context of this year's election of Pope Francis, it's clear the two men share more than intertwined names. Born within a month of each other, both carry scars of illness from early in life, and both joined religious orders. Each was appointed archbishop of his hometown in the late 1990s and made a cardinal by John Paul II shortly thereafter. Each went on to serve as president of his national episcopal conference (Bergoglio from 2005-2011, George from 2007-2010). Perhaps not surprisingly then, their ideas also overlap. A few themes rise to the top:

1. God makes a difference in our encounter of other people. 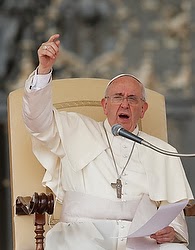 Since his election, Pope Francis has made repeated references to a need for a "culture of encounter," in which Christians go beyond the boundaries of their lives and encounter people on the margins of society. Pope Francis attests from his own experience that people encounter Jesus in the poor and marginalized. It is also necessary for the healthy functioning of society (from war to financial practices to our political discourse) that all people recognize each other as human beings with a dignity that comes from God.

In his 2009 book, "The Difference God Makes," Cardinal George also addresses the connections between people. He says relationships are fundamental to a person's identity (father, mother, daughter, brother, etc.) and says God extends such relationship to include the whole world. "You can't possibly be Catholic if you're not open to the world God loves," Cardinal George said. And to be part of a universal Church is to care for the whole world. This has ramifications for how we relate to the poor, the unborn, the elderly, the sick, and victims of violence and natural disasters, whether in our back yards, or half a world away.

(Update: December 12) Pope Francis took these themes a step further in his first message for World Day of Peace, "Fraternity, the Foundation and Pathway to Peace." The pope wrote, "A conversion of hearts is needed which would permit everyone to recognize in the other a brother or sister to care for, and to work together with, in building a fulfilling life for all. This is the spirit which inspires many initiatives of civil society, including religious organizations, to promote peace."

2. God never tires of forgiving everything.

"The Lord never tires of forgiving," Pope Francis said in his first Angelus message. "It is we who grow tired of asking for forgiveness." As it turned out, this was the opening line of one of the major, oft-repeated themes of Francis' pontificate: God's mercy. 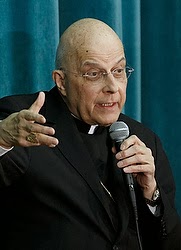 Cardinal George contrasts the Church's mission of mercy with the prevailing culture. (Again from his 2009 book) "Everything is possible, but nothing can be forgiven," in society, but in the Church, "There is much activity that is forbidden. But in the end, everything can be forgiven." Cardinal George later elaborated to John Allen that, in a legalistic culture, "Punishment has to be legal, and it has to be permanent." In other words, the response is not to forgive, but to discard.

Pope Francis' condemns a "throwaway culture" that treats people as disposable commodities. The Church envisions a society in which every person is included and has what is needed to flourish. This principle underpins the U.S. bishops calls to reform the immigration and criminal justice systems, as well as Pope Francis' powerful pastoral visits to Lampedusa island and Rome's youth penitentiary.

As the College of Cardinals deliberated over the qualifications and identity of the next pope, they frequently invoked words like discernment and governance. Cardinal George, however, used a word that might have seemed unusual: freedom. The cardinals must be free to share their thoughts on the needs of the Church in total confidence, he insisted. The cardinals must be free from all outside influence to choose the man they believe to be best suited. And the new pope must be free of any baggage that interferes with his ability to govern the Church.

The words have proved prophetic. In the months since his election, Pope Francis has shown the world what the freedom of God looks like, imbuing usually scripted moments with spontaneity and his informal style. Even the people who knew him in Argentina, including his sister, have observed that this isn't the same man. John Allen reported in October that Pope Francis has explained privately that a deep sense of peace and freedom came over the pope following his election and has remained with him.

"God's word is unpredictable in its power," Pope Francis writes in his apostolic exhortation Evangelii Gaudium. A surprising, unpredictable God is how Cardinal George describes the experience of the Holy Spirit and Pope Francis' election. Surprise over the choice of pope. Surprise over the pope choosing the name Francis. It's been a year of surprises. And as Pope Francis celebrates his first Advent as pope and Cardinal George celebrates 50 years as a priest, Catholics can thank God for both men and for his gift of surprises.