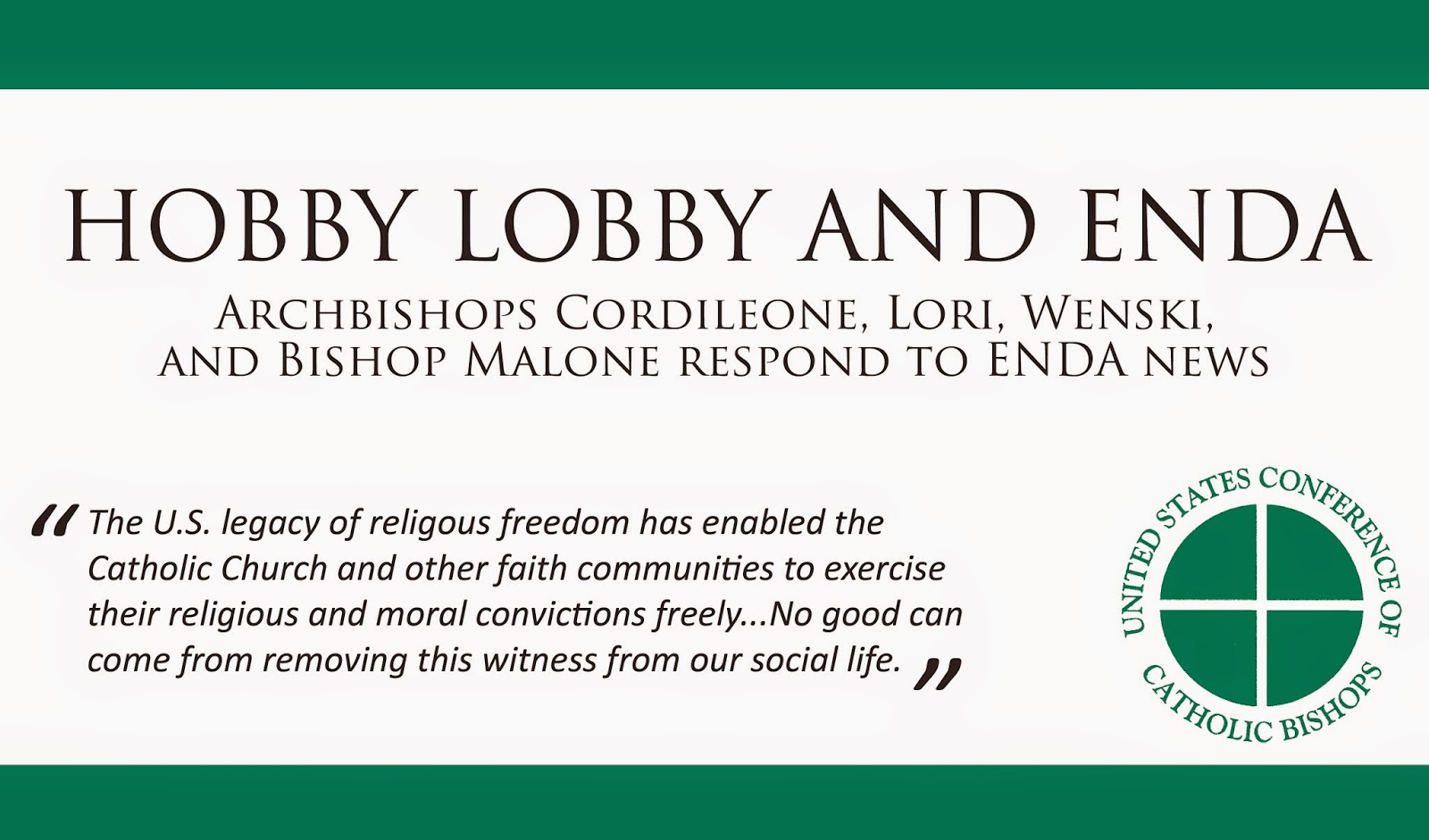 
The Washington Post reported July 8 that the American Civil Liberties Union and other advocacy groups were no longer supporting the Employment Non-Discrimination Act (ENDA). The reason, said the executive director of one of the lead organizations: the Hobby Lobby decision opens the door for private companies to determine that “LGBT people are not equal…and fire them.”

But the Hobby Lobby decision does no such thing. The decision by the U.S. Supreme Court was an application of the Religious Freedom Restoration Act (RFRA), which requires that, if the federal government wants to impose a “substantial burden” on the religious exercise of its citizens, it must prove that the burden serves a “compelling government interest” and does so by the means “least restrictive” of religious exercise.

The decision was the Court’s recognition that in the case of the HHS contraceptive mandate the government failed to use the “least restrictive means” of providing coverage for certain contraceptives. The Court deliberately said nothing about whether the government had a “compelling interest” in requiring that coverage. In any event, the current debate about ENDA does not focus on its interplay with RFRA, but instead on whether ENDA itself should have any exemption for religious employers – as all prior versions have – and if so, how broad it should be.

So what is really the matter with ENDA according to these groups?

As Pope Francis wrote: “A healthy pluralism…does not entail privatizing religions in an attempt to reduce them to the quiet obscurity of the individual’s conscience or to relegate them to the enclosed precincts of churches, synagogues or mosques. This would represent, in effect, a new form of discrimination and authoritarianism” (Evangelii Gaudium no. 255).

To dismiss concerns about religious freedom in a misguided attempt to address unjust discrimination in the workplace is not to advance justice and tolerance. Instead, it stands as an affront to basic human rights and the importance of religion in society.

The U.S. legacy of religious freedom has enabled the Catholic Church and other faith communities to exercise their religious and moral convictions freely and thus contribute to the good of all in society. No good can come from removing this witness from our social life.

This also makes a July 8 letter to President Obama about a proposed ENDA executive order rather remarkable: it is from religious leaders who argue against religious freedom protection in ENDA. One would expect these leaders to defend the rights of all people – even those who may disagree with them – to act according to deeply-held religious beliefs and moral convictions about the dignity of the human person and the purpose of human sexuality. Instead, these faith leaders go the opposite direction in the name of “anti-discrimination.”

Indeed, discrimination is already happening to those who advocate for religious liberty protections. Just after the president of evangelical Gordon College signed a coalition letter asking President Obama to include such protections in a proposed ENDA executive order, the college became the subject of review by its higher education accrediting agency.

Unjust discrimination against any one – whether that person experiences same-sex attraction or is of a particular religion – harms us all. But ENDA is simply not a good solution to these problems and, as the Bishops explained last November 7, it should be opposed.

Instead of protecting persons, ENDA uses the force of the law to coerce everyone to accept a deeply problematic understanding of human sexuality and sexual behavior and to condone such behavior. The current proposed ENDA legislation is not about protecting persons, but behavior. Churches, businesses and individuals should not be punished in any way for living by their religious and moral convictions concerning sexual activity.

Eliminating truly unjust discrimination – based on personal characteristics, not sexual behavior – and protecting religious freedom are goals that we all should share. The current political climate makes it very difficult to maintain a reasonable dialogue on these contentious issues, but we must keep trying.

Lobbying for coercive laws that violate freedom will not promote justice in the workplace. Nor will it advance the common good to seek to silence debate about sexual morality. We, like all Americans, wish there was an easy way forward. There is not. But there is an honest one. And it starts with the unflinching commitment to the inherent dignity of every human person, and to the “healthy pluralism” we all wish to share.