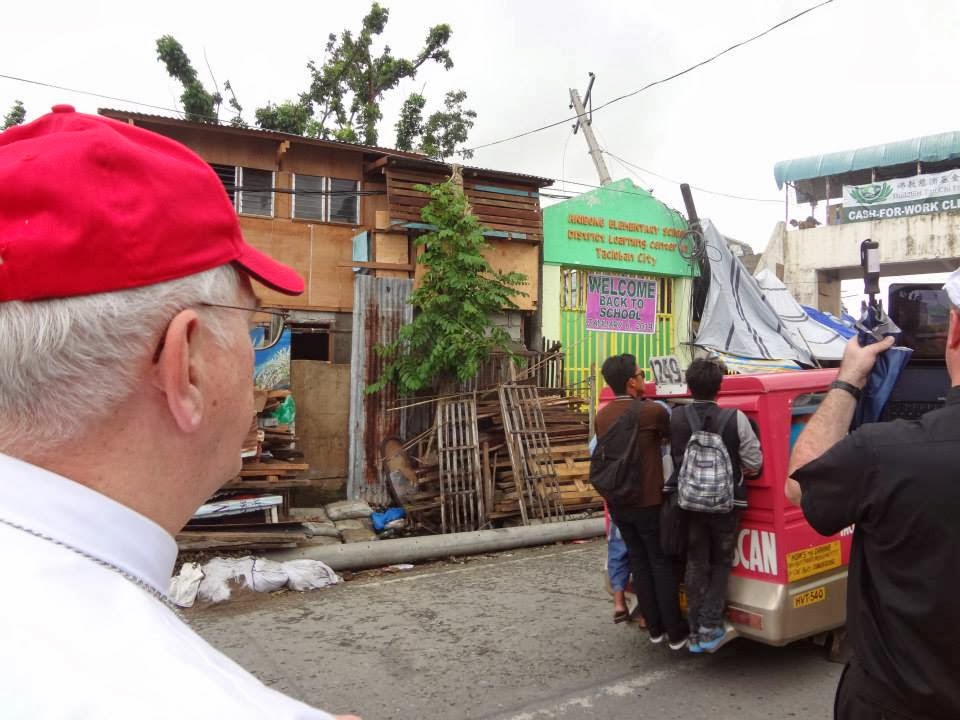 Note: This blog first appeared on the Archdiocese of Louisville's site.

This morning, we take a plane ride to the Island of Leyte where the typhoon hit at its full destructive force of 200 miles per hour in November. Please join me in prayer that I and those with whom I am traveling will be true missionaries of hope. We will see lots of destruction, some effort at rebuilding and, I am told, lots of faith and hope.

Yesterday Cardinal Tagle of Manila spoke very movingly of the destruction but emphasized: we are not victims. The Filipino people are very resilient. The nuncio, Archbishop Pinto, a very gracious representative of Pope Francis in the Philippines, told us later in the day that he went to Leyte on Christmas Eve and celebrated Mass on the eve and day of Christmas. He said: “Where else should I be?” His remarks were very touching and summed up all that we have been hearing in the briefs we received: The Filipino people are a brave people – a people filled with deep faith!

A school opens in areas devastated by Typhoon Haiyan. Archbishop Kurtz points out that the resumption of school for children in disaster areas is a key component of a return to normalcy.

In our meeting with him yesterday, Cardinal Tagle recounted his visit and his impressions. He told us how inspired he became as he saw people, who had lost everything, with such faith and hope in their hearts. He also shared the shock that priests and other leaders experienced – some losing family members and grieving, while at the same time being called to lead their people. The parish and local chapels are so central in the lives of the faithful – of course for worship and prayer but also as centers of their social lives and humanitarian efforts. Joe Curry, the Catholic Relief Services’ man on the ground in Manila when the typhoon struck, said that there is such great trust and reverence for the local parish church that there is little or no danger of looting or taking supplies, as they are brought by Catholic Relief Services (CRS) to those most in need.

The president of the Bishops’ Conference here, Archbishop Socrates Villegas, and I had a bit of a reunion. He and I were both delegates to the 2012 Synod of Bishops in Rome and actually were in the same small work group, so we had great chance to come to know each other and begin a friendship in the Lord. He, too, spoke of resilience and of the need for true partnerships.

So we will be seeing destruction later today. It will not be the same as traveling in November right after the typhoon hit. Joe Curry said at that time it was almost impossible to get around. It took some time to get to the east coast of the island where the destruction was most severe. Now, the small airport is open, and we will be able to travel. Nonetheless we are all steeling ourselves to the shock we might encounter – lots of rubble and some steps at recovery and, as the bishops told us, a great deal of resilience and hope!

Catholic Relief Services has already served some 200,000 people. As you might imagine, most of the aid was in the form of shelter, water, sanitation, and food. Even now the deeper work of more permanent housing and cash for labor jobs have begun by CRS, and so we might see some beginning signs of normalcy. The coordination is clearly in the hands of Caritas Philippines or NASSA as it is known here. CRS and other Caritas agencies are working together to assist, always mindful that it is best for the work to be done by those who know the land the best. I am impressed by this model of good collaboration of all the Caritas agencies of the Catholic Church.

At the briefing yesterday I asked about schools. Some time ago, I was told that the best and surest way to re-establish normalcy in a devastated area is helping the children return to school. That was certainly true of Hurricane Katrina in Louisiana, and the Catholic schools in New Orleans did heroic work to reach out to all children. I am told that schools in make-shift areas have already begun to appear in Leyte.

I imagine that it is true that tragedy brings out the best of people and reveals depth of character. We will likely learn a great deal in the next three days as we experience the reality of the devastation and the resiliency of brave people of faith. It is with solidarity, as one Church united by the grace of Jesus Christ and in a friendship that overflows into truly cooperative partnerships, that I suspect I will return from the island of Leyte three days from now. These gifts will likely mean all the more given the tragic circumstances in which they arise. We pray for the brave people of faith and hope in the Philippines.