What I learned in the Philippines 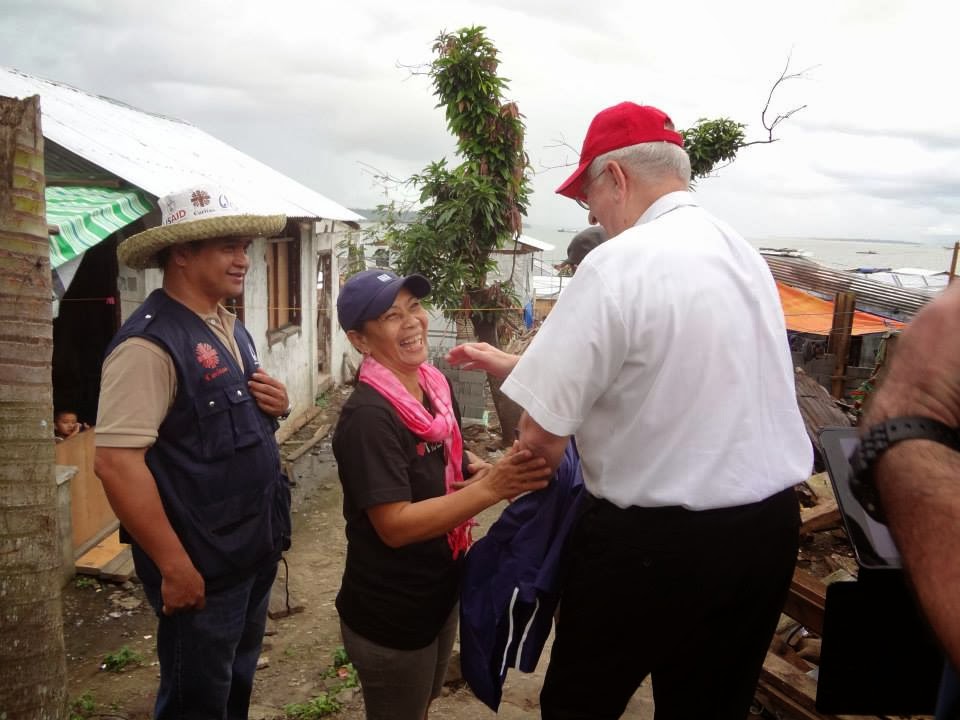 Seven cargo ships ran aground in the Anibong region of Tacloban City during Typhoon Haiyan, or Yolanda, as it’s called in the Philippines. Three months later, children run and play around the mud-encrusted rudders of one ship. Wooden poles stick out of the water nearby where now-destroyed houses once sat on stilts. Debris litters the ground for miles. Power lines overhead dangle on patched and broken poles, impossibly tangled.

Anibong was my first encounter with a neighborhood devastated by the typhoon. Our delegation representing the U.S. bishops and Catholic Relief Services could see immediately how great the need for aid remains. Over February 4-6, I also would see the vital work of CRS in the lives of these people, work made possible by the generosity of U.S. Catholics and donors around the world.

Walking among some houses now reduced to rubble, I encountered some young people playing basketball. Children are a great prism to view the life of a community. They reflect the values of their families and conditions at home. Speaking to these young people, I saw something I would see repeatedly: the courage and resiliency of the Filipino people.

Cardinal Luis Antonio Tagle of Manila had met with us the previous day and cautioned against regarding the Filipino people as victims or ourselves as rescuers. We should be open to learning from the people, he said. What I learned was that, even as they rebuild their homes and struggle for their families’ livelihoods, the Filipino people have real faith and radiate what Pope Francis calls the joy of the Gospel. They have felt Yolanda’s wrath, but they feel God’s love even more.

People in the United States and around the world who have given to typhoon relief efforts don’t get to see the good that their generosity promotes. It was humbling to feel the gratitude of the Filipino people and to see the warmth and emotion in their faces as they greeted us. CRS works with partner Caritas organizations from around the world, and the local Church takes the lead in terms of discerning needs and responding. Together they work on a scale that makes a crucial difference in the lives of individuals and communities.

Four million people were displaced by the typhoon, and CRS has helped repair or build 20,000 shelters. They’ve brought clean water and sanitation services to thousands of displaced people. Farmers and others left jobless by the storm are able to support their families through livelihood recovery programs, clearing debris, planting crops and building homes. Catholics in the United States should know their generosity enables essential work of the Gospel, serving those in need without any thought of repayment.

Dioceses in the United States have the option to specify whether their donations go only to relief efforts, like CRS, or to relief efforts and church rebuilding. The overwhelming majority of churches in the Archdiocese of Palo sustained damage of some kind. This included eight that were completely destroyed and a cathedral that, despite having its newly renovated roof blown completely off, still drew a full house on a Wednesday evening when we celebrated Mass. This experience and others showed the essential role of the Church in the Philippines as a hub of community life. During Yolanda, countless people sought shelter in churches. Following the storm, churches have played a role in storing and distributing supplies. People’s everyday lives and identities are enmeshed in the parish.

As I visited communities, urban and rural, and spoke, listened and prayed with the Filipino people, the sense that we are one Church overwhelmed me. The people of the Philippines are walking a difficult road, but the whole Church walks it together, as we are present in our relief efforts, our friendship and our prayers. I return to the United States filled with joy and gratitude for gift of the Filipino people and with the firm belief that they will continue to overcome.

Archbishop Kurtz is archbishop of Louisville, Kentucky, and president of the U.S. Conference of Catholic Bishops.

Watch this clip from Archbishop Kurtz's homily at the Palo cathedral: