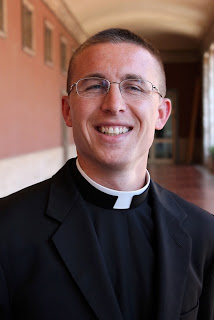 I wanted to bring others to Christ even when I played varsity hockey at the University of St. Thomas in St. Paul while I attended the seminary. With both friends on campus and close friends on the hockey team I saw how important the Catholic witness can be.

The seminary offered a “Last Chance Mass” Sunday evenings and we created a “Men’s Leadership” group that met every Thursday night to bring people to Christ. But I found it was the personal relationships that I had with my teammates and continue to have with them that made the most difference. As assistant captain on the hockey team and someone who battled hard with them on the ice, I achieved ‘street credit,’ one that let me to say things to them that others sometimes couldn’t. I could challenge them out of concern for them. Because of our friendship, they knew I wanted what was best for them.

There is a peace, joy and hope that comes from knowing nothing can separate us from the love of Christ. It’s this peace, joy and hope I want others to have. As a priest I will have the opportunity to bring that to people. Celebrating the sacraments, I will act in the person of Christ. When people confess their sins to me, they will be confessing them to Christ and meeting Christ. When I anoint someone’s mother or grandpa before they pass away—it will be Christ anointing them. And when I pronounce the words of consecration, it will be Christ speaking through me.

I’m not sure how the Lord will use my athletic abilities. I want to join a men’s league when I return to Northern Minnesota. Priests need to invite people back to the sacraments. In Minnesota, hockey can be that evangelical tool.

During one of my summer’s at home I played hockey a lot. While I was resting on the bench, one of the guys swore. Another player said, “Hey, don’t swear, Father Nelly is here.” He then said he was saving all his “confessions” for when I would be ordained. I told him he shouldn’t wait, but if it took my becoming a priest for him to reconcile with God—then what a gift, and I thank God for that.
Posted by Matt Palmer at 1:51 PM