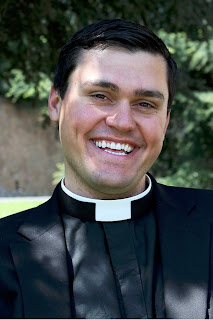 I grew up without brothers, but discovered upon entering the seminary that I was not called alone, but as part of a band of brothers responding to the Lord’s call. Seminary life is meant to ready men to be parish priests. We structure our day around prayer, we study to be able to teach the faith, we look ahead and begin to exercise some of the various apostolates that will be entrusted to us in the future, such as visiting prison, working among the poor and engaging in campus ministry with college students.

People often ask seminarians and priests to share their vocation stories. Each time I recall my own, I see more clearly how the Lord has worked in my life. Raised as an Evangelical Lutheran, I learned the importance of prayer and the Scriptures. In high school when restless to learn more about the Catholic Church, I felt a hunger for the sacraments – in particular for confession and the Eucharist. My hope as a priest is to help Catholics recognize these precious gifts that they possess, which can be easily taken for granted. Eight years in the seminary have stoked the fire of zeal within me and since my diaconal ordination in October, that zeal found a real outlet when I began to preach, baptize and assist at the altar.

This year almost fifty men will be ordained from the Pontifical North American College along with dozens of others across the country. We will embark on a lifetime of service, commissioned to act in Jesus’ name and dedicate ourselves to prayer, the sacraments and preaching. We will be ordained in the Year of Faith, and our first task is to believe and to propose Jesus Christ to those we meet. We know that priesthood is not for our own gain since it entails the carrying of the Cross. Like Christ we come not to be served but to serve.
Posted by Matt Palmer at 1:37 PM