One of the pope's most prominent and important roles is to be a moral voice in the face of suffering and confusion in the world. That's the lesson the Church celebrates in triplicate today.

On May 15, three popes made major contributions to the development of Catholic social teaching: Pope Leo XIII with his landmark encyclical letter Rerum Novarum (1891), Pius XI with Quadragesimo Anno (1931) and John XXIII with Mater et Magistra (1961). The last two encyclicals honored the first on its 40th and 70th anniversaries, respectively.

So what did Leo XIII say that was so worth commemorating? 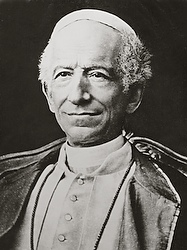 "It must not be supposed that the Church so concentrates her energies on caring for souls as to overlook things which pertain to mortal and earthly life," Pope Leo wrote in Rerum Novarum. In the wake of the Industrial Revolution, the world faced issues it hadn't faced before. Even the name of the encyclical translates "new things."

As some called for outright socialism while others insisted on an unrestrained laissez faire economy, Leo XIII applied the moral voice of the papacy and the timeless teachings of the Church to this upheaval. In doing so, he launched the modern era of Catholic social teaching, the hallmarks of which include:
Forty Years and What a Mess 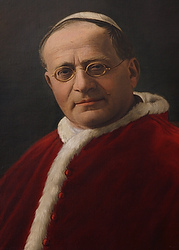 When Pope Pius XI sat down to reflect on the 40th anniversary of Rerum Novarum, he did so against a backdrop of the worldwide economic turmoil of the Great Depression. And it shows: "Unbridled ambition for power has succeeded greed for gain; all economic life has become tragically hard, inexorable, and cruel."

In Quadragesimo Anno (literally "Forty Years"), Pius XI reaffirmed the earlier teaching on just wages, unions and the role of government (paragraph 71). He critiqued both unbridled capitalism and communism (paragraph 46). He also introduced the principle of subsidiarity (paragraph 79), which states that decisions affecting the common good of a society be made at the lowest possible but highest necessary level of authority. This means delegating to the grassroots level in some situations and action by national and international bodies in others. 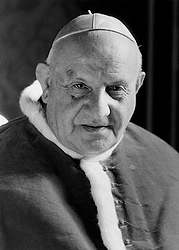 When John XXIII honored the 70th anniversary of Rerum Novarum, he didn't face the disaster of the Great Depression, but a spirit of optimism and a world feeling more confidently equipped to tackle challenges like global hunger and the development of nations.

As a result, in Mater et Magistra (literally "Mother and Teacher"), Pope John took the global view: "The solidarity which binds all people together as members of a common family makes it impossible for wealthy nations to look with indifference upon the hunger, misery and poverty of other nations whose citizens are unable to enjoy even elementary human rights. The nations of the world are becoming more and more dependent on one another and it will not be possible to preserve a lasting peace so long as glaring economic and social imbalances persist."

Down to Present Day

The development of the Church's social doctrine continued with John's Pacem in Terris (1963), issued 50 years ago in April. Subsequent popes have also carried it on in encyclicals including Paul VI's Populorum Progressio (1967) and John Paul II's Laborem Exercens and Centesimus Annus (for the 90th and 100th anniversaries of Rerum Novarum,  in 1981 and 1991, respectively). More recently, Benedict XVI's Caritas in Veritate (2009) responded to the financial crisis of 2008.

Pope Francis has already entered the narrative too, albeit in a considerably shorter length than an encyclical, a tweet on May 2 that read, "My thoughts turn to all who are unemployed, often as a result of a self-centered mindset bent on profit at any cost." However, with a name choice guided by a concern for the poor, peace and the environment, it would seem only a matter of time before he says more.

Just this morning, Pope Francis addressed the world financial and economic crisis, telling an audience of diplomats that the source of these problems "is in our relationship with money and our acceptance of its power over ourselves and our society."

Catholic Social Teaching begins here, but it is only real when it flows from you and me!