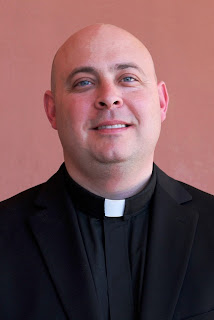 Ten years ago, I returned to the Catholic faith from which I had fallen away. I had enjoyed life as a golf professional, maybe a career God thought would help me in future conversations with parishioners. However, there was always something missing, a sense of peace, that drew me back to the faith and toward the priesthood.

As a priest I want to be a bridge between God and man. I want to be an instrument that helps people become reconciled to God, perhaps through confession. I want to bring hope and encouragement in the face of life’s difficulties, and I want to share parishioners’ joyful moments at baptism and marriage. I hope to be an effective preacher who can open up the richness of God’s revelation and challenge listeners to live the Christian life. I also know that to do these tasks, I have to be a man of prayer who teaches not only by word but by example.

When I return to the diocese I will be an associate in a parish. As is customary in our diocese, during the first few years of priesthood I’ll likely teach in one of our local Catholic high schools. These are opportunities to bring God into the lives of parishioners and students through the sacraments, preaching and teaching. I sense that my experience of living outside the practice of the faith will be something God will use to help others who struggle similarly.

I spent two summers in two different parishes in the Diocese of Rockford. I taught catechetics, visited the homebound and the sick, assisted at Mass, including funerals and weddings. It was on-the-job training where I tried to absorb the wisdom of those who have spent years caring for their parishioners. In the seminary, I ministered as a deacon at Camp Darby, an Army Post close to Pisa, Italy. All these have been in preparation for the priesthood.

My vision of the priesthood has been formed by many faithful priests and bishops in the Rockford diocese as well as in the seminary. They have shown me what a good priest looks like in prayer, preaching and serving people. In the shadow of St. Peter’s Basilica, my vision also has been formed by Pope Benedict XVI and Pope Francis. Their example of humility and faithfulness draw all of us to a deeper relationship with Jesus Christ.