Embrace a Vocation with a Listening Heart 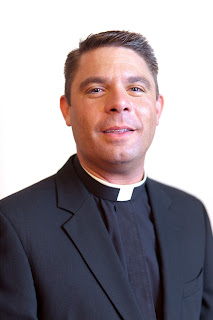 On June 10, 2006, I was ordained a Jesuit priest, a fact that likely surprised the master chefs who helped train me for two years of intensive study at the Culinary Institute of America (CIA) in Hyde Park, New York. They predicted I would go on to great things – perhaps even own a restaurant in my home town of Philly –where my love of food first took hold. But, like any good vocation story, there’s a twist, and in my case, God had other plans.

After graduation from the CIA, I discovered that restaurant life was not what I had expected.  The hours were long, the work unrewarding. To hedge my bets against the failure of a long-held dream, I began to pursue a degree in food marketing at St. Joseph’s University in Philadelphia.

This led to my first real introduction to the Society of Jesus. While I had attended a Catholic grammar school where the nuns insisted that we write AMDG, shorthand for the Latin Ad Maiorem Dei Gloriam (For the Greater Glory of God) and the Jesuit motto, on all our papers, I was not personally familiar with the Society. At St. Joseph’s, I met Jesuits in person for the first time. They intrigued me because, regardless of their expertise – math, science, theology, or English – they all expressed a profound love of God through their particular academic lenses. God spoke to my heart and showed me men He had chosen to do His work. The more I learned about them, the more I found myself inspired, free, motivated to prayer and anxious to know more. I entered the Society in 1995 and never looked back.

Since the novitiate, Jesus has gently guided and taught me to turn my heart toward him daily. The people who have entered my life in ministry have reminded me that God uses us as his instrument. Finding where God calls us and responding to our own personal vocation is the key to our happiness. In my work as a vocation director for the Society now, I see how often God speaks to our hearts.
The listening heart has sustained me.  As a priest, I minister to people in their happiest and saddest moments. I have learned the richness of investing my heart in God’s mission. My heart and mind recall the people who have helped bring me to this moment in my life. Family, friends, fellow Jesuits and the people with whom I have worked in the Society have played a special role, whether through prayers, conversations, laughter or actually shared work.

One final thought.  As I headed off to the Culinary Institute as a 17-year-old determined to be a chef, a diocesan priest suggested I note the letters ingrained in the marble at the school’s front door:  AMDG.  Ad Maiorem Dei Gloriam – For the Greater Glory of God. Turns out that the culinary school on the banks of the Hudson was for many years a Jesuit novitiate. Was God calling me to a vocation as I was learning how to master the five mother sauces of French cuisine and butterfly a lamb chop?  My listening heart tells me that he was.
---
Father Charles Frederico is the vocation director for the Maryland, New England and New York Provinces of the Society of Jesus.
Posted by Sr. Mary Ann Walsh at 9:22 AM

Neat post. Thank you.
I hope to make a pilgrimage to the CIA someday to the grave of Teilhard de Chardin...