January is Poverty Awareness Month. To help raise awareness among Catholics of poverty and its underlying issues, USCCB has updated its website, www.PovertyUSA.org, and launched a Spanish counterpart, www.PobrezaUSA.org. Our blog is also running a series of posts by guest bloggers reflecting on poverty in our country and the world today. Today’s post is by Carolyn Woo. 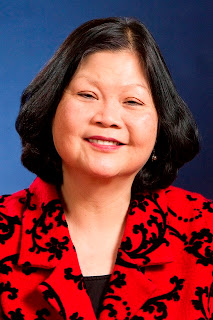 I have seen the faces of poverty as I’ve traveled with Catholic Relief Services (CRS), first as a board member and now as president, to visit projects around the world where we work with the poorest of the poor, trying to improve their lives.

Often the faces of poverty do not match preconceptions. For one, they often smile. Sometimes they sing and laugh. This is not the case after disasters have devastated communities or serious droughts have caused widespread hunger or violence has forced people into camps for the displaced. But quite often, when you visit a village where people are barely squeaking by – and more than one billion people live on less than $1 a day – while you see need, you do not necessarily see despair.

What you do see are people like you and me, who yearn for a good future for their children. You see people who want to know that they will have enough to eat, find treatment when they are sick, and be cared for in old age. But despite uncertainty, they still derive joy from the love of family, the support of a community, the depth of their faith. That is what puts the smiles on their faces, the joy in their songs, laughter in their speech.

Poverty is complex. That’s why we rely on an important tenet of Catholic social teaching: integral human development. It means we cannot ignore any part of the person: physical, psychological, political, spiritual. They go together.

How does that work on the ground? If you heard that children were not going to school, you might decide to build schools and hire teachers. Lack of education is a huge issue: nearly one billion people entered the 21st century unable to read a book or sign their name. Over 100 million school-age children do not attend school.

But sometimes the way to get children to go to school is to drill a well. For children might not go to school because the family needs them to fetch water, which can take hours if the supply is far away. Drill a well nearby and it’s easier to get water. Children can go to school. And you take on another huge problem in the developing world: almost one billion people do not have access to clean water.

Children might not go to school because they are sick and need a health clinic. Every year six million children under the age of five die of preventable diseases like malaria and diarrhea. Their diarrhea might be due to the lack of basic sanitation facilities, the situation for over 2.5 billion people in the world today. Or it might be because they don’t have enough to eat, the fate of 800 million people every day.

Progress is being made. In 2011, an estimated 6.9 million children died before their fifth birthday, compared to around 12 million in 1990. It is still tragic, but we’re getting there.

Even with a school, children might also need a meal when they get there. Perhaps they need to learn about hygiene to help avoid intestinal diseases. All of these must be addressed to fight poverty. That’s integral human development.

You learn how to get this right by working among the poor. That is why CRS always partners with a local group, often a Catholic one. Local partners help us make sure that the programs and services CRS delivers meet each community’s needs. That requires accepting the poor on their own terms, as equals in this transaction, understanding that they know better than you what it is they must have to make their way out of poverty.

I work with the homeless through the Society of St Vincent de Paul and one thing that I have gained far more appreciation of through this experience is the necessity of marriage in reducing poverty and protecting children, who have a right to be born to married parents. The evidence is in about the how marriage protects against poverty, and it increasingly surprises me that this is almost never mentioned by Catholics working against poverty. It should be mentioned frequently and there needs to be a conversation going on about what can help. Marriage seems hardly even on the radar of antipoverty efforts, even Catholic antipoverty efforts, whether in the US or internationally. To my horror I found materials of feminist religious sisters working in Africa who had no positive thing at all to say about marriage and talked only (and a great deal)about helping women get free of troubled marriages and be "empowered". Nothing about helping and promoting marriages and families (ie, a married couple together with their children, as defined in the Catechism) and how that might help everyone. It would be natural for CRS to support and educate the poor on the value of, and how to live married family life and conjugal chastity, and resist the international efforts advocating contraception, which we well know in the US has caused a devastating breakdown in married family life among the poor and the same is going to happen to these very poor people around the world. Unmarried poor moms need help, battered wives and children need help and can separate from an abusive husband, absolutely, but we must not fail to advocate the immense good of marriage, the good of the poor depends on it.