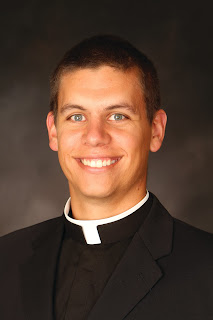 
In the Fall of 2006, I started seminary studies for the Archdiocese of St. Paul and Minneapolis. When I moved into the seminary, I found out my roommate was from Wichita, Kansas. Eventually he shared stories about Father Emil Kapaun, a priest from his diocese who joined the Army in 1944. Father Kapaun served in Korea, as did three of my great uncles. Father Kapaun, however, did not make it back alive.

My roommate shared heroic stories about the priest and gave me a book about him. A Medal of Honor recipient, the Wichita priest served God and man bravely and without hesitation. I found his commitment to his faith inspiring. He sought to bring Christ to everyone through his warm smile and love. Even after being taken prisoner, he worked to keep up the morale of fellow soldiers by making daily rounds in the camp and tending to the sick and wounded.

Father Kapaun died in that camp, but his story lives on as an example of a Catholic priest who like Christ laid down his life for others. His inspiration has helped me deal with personal struggles. When I fast, for example, I think of the small amounts of food he survived on. When I feel scoffed at for what I believe, I think of the great charity he showed when he was persecuted for the faith. Eventually his witness inspired me to work toward becoming a military chaplain.

Now in the fall of 2013, I have begun my eighth and final seminary year. I look back and see God's Providence in my life. In my own vocational call, I have felt the desire to serve others. Before seminary, I felt that call particularly from the Catholic Church. During seminary, I have felt within that call, a call to serve as a Catholic chaplain. In reading about Father Kapaun and Father Vincent Capodanno, another Catholic military chaplain who sacrificed his life for those he served, I have been moved by their witness. In 2009, I attended the funeral of Father Timothy Vakoc, a priest from my diocese, who served in the Army Chaplain Corps.

Christ desires to have a relationship with all of the men and women of our armed forces. Through those three chaplains, Christ reached out to many people in uniform. Many of those service personnel endured extreme difficulties and had difficult questions, yet with the help of a priest, they came to see that God was with them through it all.

I hope and pray that I may be a holy priest like Fathers Kapaun, Capodanno and Vakoc and I hope to bring the love of Christ to all the soldiers with whom I will serve.

Deacon Paul Shovelain is a co-sponsored seminarian/prospective U.S. Army chaplain from the Archdiocese of St. Paul and Minneapolis.