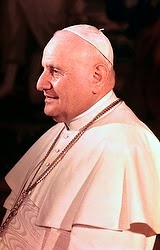 When Pope Francis approved the canonization of Pope John XXIII, one reason given was that he is already universally proclaimed a saint around the world. Canonization is one way the Church says "this is a Christian life well lived and worth imitating." John XXIII offered much in that department: joy, humility, simplicity, patience, creativity and confidence, among other virtues.

The life of Angelo Roncalli also bears another hallmark of life: unfinished business. For much of his ministry, Father, then Archbishop, then Cardinal, then Pope Roncalli repeated several steps:
Examples abound:
The only "cushy" assignment he ever got was what he assumed would be his retirement as Cardinal Patriarch of Venice. Of course God had other plans.

Elected pope on October 28, 1958, Roncalli was once more handed an impossible task: renewing the entire Church and readying it to face the challenges of the modern world. True to form, he immediately set about initiating change that no one would have thought possible in such a short time, announcing an ecumenical council only months after becoming pope and planting seeds of reform on issues including the liturgy, ecumenical and interfaith matters, and the role of the laity.

Also true to form, he was once more called away just as the work began to bear fruit, dying in June of 1963.

"In this life, all symphonies remain unfinished," said the Jesuit theologian Karl Rahner, who played an influential role at the Council. Pope John's life reflects this mystery, that Christians are called to serve God in their daily lives, but more often thatn not, what we start will inevitably end up someone else's concern. John XXIII had the holy serenity to see that the big, final picture was in God's hands alone.

Many biographical details for this post were gathered from "A Man Named John," by Alden Hatch, Hawthorn Books, Inc., 1963.

Don Clemmer is the USCCB's Assistant Director of Media Relations
Posted by Don Clemmer at 2:54 PM